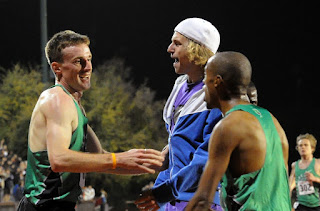 After Chris Solinsky held out until the last minute to scratch last night before Galen Rupp ran away from Solinksky's teammate, Matt Tegenkamp, for the win, thoughts immediately turned to who will compete tonight? Who will run, who will be satisfied with one Team USA birth? Rupp looked excellent running away from Teg in the last 800 in a blazing 1:52, while Shalane Flanagan took it from the start and dropped an incredible 30:59.7. Flanagan used a good deal more energy going hard from the gun, while Rupp was content to sit until the end, like he did in college. I'll guess that both Rupp and Flanagan will pass tonight, but if either of them compete, I would pencil them both in top three.

Men's 5000
1. Chris Solinsky
Solinsky will be the freshest tonight after Bernard Lagat ran a 1500 qualifier, Rupp ran the 10,000, as did Solinsky's teammate, Tegenkamp. He'll probably employ the same tactic as Rupp did last night and likely go with 800-1000 to go.

2. Bernard Lagat
Lagat is the king of rounds and famously won the gold in both the 1500 and 5000 at the 2007 World Championships in Osaka. He'll conserve energy as well, and likely go when needed. Will he have enough to overtake Solinsky? Maybe, but keep in mind he does have another race to run in the 1500 final.

3. Galen Rupp or Matt Tegenkamp (whoever runs)
Both Rupp and Teg only worked hard for about 1000 meters last night and both could come back today and compete, but it's unlikely both will. A 10k on the track is tough on your legs, even if you're Kenenisa Bekele!

Darkhorse: Stephen Furst
Raleigh's Stephen Furst has had a great year, winning the Emerald Nuts 4-Miler in a course record to start the year off and then setting a personal best at the Payton Jordan 5000 in 13:29.05. He'll be fresh and ready to go!

Women's 5000
1. Molly Huddle
The American Record holder will be fresh and should be ready for whatever is coming at her.

2. Jenny Simpson
With a lot of competition in the 1500, I wouldn't be surprised to see Jenny B line up in the 5k tonight to try and sit and kick. Rowbury could fare well in this tactic as well (Simpson didn't run)

Angela's great in championship races and shouldn't be slept on!

Darkhorse: Lauren Fleshman
Although coming back from history, Fleshman seems to be rounding into shape. And as we know with her, it's all balls!

We'll get some action on TV tonight as well as continued coverage on Runnerspace.

Want to see how I fared? Check out the Nationals Recap

Posted by Writing About Running at 8:14 AM