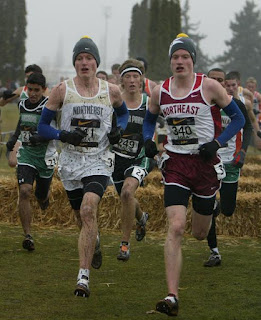 This Friday night, the brothers Rosa of New Jersey will look to channel the same energy that they brought with them last year to Greensboro, where they went 1-2 in the New Balance Outdoors Nationals 2-Mile, going 8:44 (Joe) and 8:51 (Jim), and beating some guy named Lukas handily (Verzbicas finished sixth in 8:58). They seem to be peaking at the right time, as they were both on pace for a New Jersey state record last week at the Meet of Champions before the plug was pulled at 2800 meters due to lightning.

They will have their hands full as USA World Junior Cross Country Team member and the always consistent, Ammar Moussa, will be ready to battle it out with the brothers (he finished on Joe's heels and ahead of Jim at the  Jim Ryun Dream Mile). Also in the game will be New York's Chad Noelle, who won the Millrose Games Mile earlier this year and has openly stated he's going after Josh McDougall's state 2-Mile record of 8:48.11 on Friday night. These four will continue their battle next year as well on the cross country course as the Rosas are heading to Stanford, Moussa is heading to Colorado and Noelle is heading to Oregon (with Verzbicas).

Also in the mix will be Florida's Jimmy Clark and North Carolina's Mitch Mallory, amongst a host of other well qualified athletes. The race will go off at 7:45 pm eastern on Friday night and full coverage is available at the New Balance Outdoor Nationals website. I'll be there live tweeting as well! 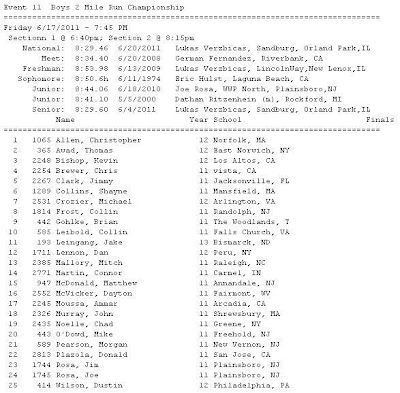