5 Important Steps for the Track and Field Union

After a brief, post-Olympic hiatus, I'm back. Lots to talk about with the cross country season now in full swing and the talk of track and field unionizing. This opinion piece is the byproduct of 32 ounces of dark roast Blue State Coffee and a true desire to help the sport thrive now, and in the future. Note: I am a supporting member of TFAA.

If you had't heard yet, Track and Field is unionizing. This has been brewing for a few years with the development of the Track and Field Athletes Association aka TFAA. What started as a small group of enthusiasts, has gained some major traction with the endorsement and membership of the biggest name in the sport, Usain Bolt. Now is the time to really push the agenda to truly professionalize the sport and give the athletes more ownership of their earning potential.

But what can they do? There's tons of ideas floating around and every athlete has different wants and needs. That in mind, these are the 5 things I think should be at the top of the agenda.

1. Make joining the union a necessity
For a union to work, everyone must be a part of it. Every player in the NFL is part of the players union. Same goes for any other major sport. This must be the same for track and field. You must have a united front to bargain with USATF, the IAAF and the IOC. If everyone is acting on their own, nothing will change. A united union must stand together and act as the only pool of athletes that the Diamond League can select from. Rogue athletes must be treated like scabs. Why so harsh you might ask? Go to #2.

2. Implement a stronger international drug testing pool
Aside from cycling, track and field comes under the most scrutiny for drug use. Just watch the Olympics and you'll see athletes come out of nowhere every four years, win medals, then never be heard from again. To thrive, the sport must police itself. A union must strengthen the relationship with WADA, USADA (in the US) and the national anti-doping organizations from every nation that has members in the union. The rules must be strict and must include every level of testing that is available (biological passport, human growth test, etc). Every athlete must back this force meet directors to shun those who choose not to participate in the necessary testing.

3. Get sponsor rules changed
For athletes to thrive, the rules must change so that they can make a living; not just get by. I spoke with Matt Scherer outside of the Wild Duck Cafe at the Olympic Trials and noticed he was wearing a Picky Bars sweatband. Five feet away was Lauren Fleshman. So I pulled them together and asked, "why not wear a Picky Bars singlet while your racing?" That turned into "you've gotta get Picky Bars approved as a club with USATF, then it can only go in the upper right hand corner of the singlet." Why can't Picky Bars or say, McDonald's or Subway be a title sponsor. Or dare I say Budweiser or New Belgium; a beer company with major ties to cycling. Lead sponsors should not be limited to shoe companies. If Nike or Adidas want to sign an athlete to an exclusive contract, that's great! But the union should agree upon a multi-spot sponsor design and present it to USATF nationally and the IAAF internationally. An example of a multi-spot sponsor could be logos the center of the singlet, the upper left hand corner (as the upper right is reserved for club affiliation), the back of the singlet and then any shoulder temporary tattoos or sweat/headbands. I am not tied to any particular arrangement, but this is something that should be agreed upon and presented before the 2013 outdoor season. Think PGA more so than NASCAR.

4. Force the IOC's hand for the 2016 Olympics
If track and field comes as a united front, they can overturn rule #40, or at least change it to better accommodate the athletes. Track and field is arguably the centerpiece of Olympic competition and the athletes should be able to profit. The Olympics is 10 to 11-figure business and the athletes get almost nothing. This isn't 1912, or even 1984 for that matter. If getting paid is too much to ask, athletes should be able to promote their sponsors during the Olympics. That is why companies sponsor athletes that compete in "Olympic Sports." You must provide them some return on investment or they won't invest during those other four years. This is where Usain Bolt's leverage will help, as he has been the star of the past two Olympiads and certainly will be a focal point in Rio. Is the IOC going to turn him away? I doubt it.

5. Develop the Track Club system in an organized manner
When the Oregon Track Club was performing so well at the 2008 Olympic Trials, everyone wanted OTC gear. Shirts, singlets, warmups, etc. They are and excellent example of a well developed club with a well developed brand. The Oregon Project is starting to do the same. I keep waiting for Jerry Schumacher's group to officially brand itself "Rip City TC." Everyone in the union should join a club if they aren't on one already. It's an excellent marketing tool and almost demands that the IAAF allow that upper right hand logo. Remember how cool the Santa Monica Track Club was? MVP Track Club should have the same brand identity. They've got the two top sprinters in the world! I've never even seen a logo. The union could develop and promote international club championships where athletes only wear specially designed club gear. Those would be big bragging rights that would certainly entice TV outlets.

While I know these things won't happen overnight, I am hopeful. Things are materializing. If you need any help Khadevis, or want me to sit on a board, I'm here for you. I'll be happen to elaborate on any of these points in long form, just email me.

And with all this in mind, any step forward is a positive step, so lets get moving!

UPDATE: I went on The Runaround on ESPN Radio Baltimore on 10/1 with TFAA President, Khadevis Robinson, to discuss the union. Listen to the recording here.

Support the site and start here when you shop on Amazon.com
Posted by Writing About Running at 8:19 AM 5 comments:

Get in the Trailer 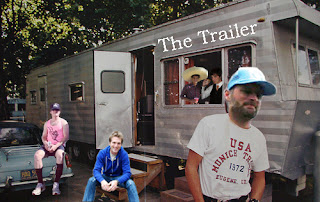 I'm not just a writer, I am also a runner. At least I was once a runner. I didn't run a whole lot after high school, but picked it up again when I turned 30. Right as I was starting to see some success, the injury bug took over. A few weeks ago, I made the decision to get a cortisone shot in my plantar fascia. Best decision I ever made.

I discussed the ordeal at The Trailer. They even had an artist come in and add some incredible illustration to my tale.

If you are unfamiliar with The Trailer, it's an excellent new site that features the writing of my like-minded friend, Jon Gugala, as well as an excellent podcast that discusses the sport with an attitude that you won't get elsewhere.

Check out my article on The Trailer here!

Support the site and start here when you shop on Amazon.com
Posted by Writing About Running at 4:33 PM 3 comments: