My 2 Spikes Worth: Track & Field overload this weekend! 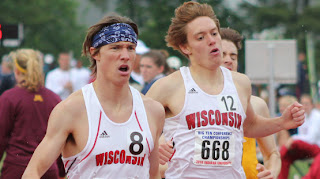 Now as much as I love the sport of Track & Field, I feel somewhat overloaded this week. I know things are planned very well in advance and that there are a lot of moving parts at play, but to have the NCAA Division I Championships, the Bislett Games and the Adidas Grand Prix all over the course of three days seems like overkill.

The Bislett Games has always been a showcase event for Track & Field, and still is for that matter. It just doesn't feel the same with everything else going on stateside. I personally loved the old stadium with the 6-lane track. It was great for distance events as the crowd was right up on the field. In 1999, Sports Illustrated declared the old Bislett Stadium one of the top 20 sports venues of the 20th century, so I am not alone! It was always a highlight of the year to watch the Dream Mile at the end of the meet as there was always a watch on for a possible world record. Not to sound too American, but without any Americans to root for, this years Dream Mile seems a little less dreamy. I know that the race will be excellent with Britain's Andy Baddeley, Kenya's Silas Kiplagat, Asbel Kiprop, Haron Keitany and Augustine Choge, Australia's Jeff Riseley and Ethiopia's Mekonnen Gebremedhin toeing the line to take a crack at mid 3:40's, but is it too much to ask for just one measly yank to root for? I know that recent graduates and Team New Balance rookies Craig Miller and Jack Bolas are running the 1500m (Oslo's equivalent of the International Mile at Prefontaine) and with 3:37 PR's, and would likely be hard pressed to hang on to this field, but can someone call Alan Webb or at least get David Krumenacker to rabbit? My patriotism aside, this will be a great event, but is no longer the meet closer as there will be some guy named Bolt running the half lap to drive the Norwegians into a frenzy to close the show!

The Adidas Grand Prix is where all the American milers will be that aren't named Matt Centrowitz, Dorian Ulrey, AJ Acosta or Miles Batty. Where in years past the Prefontaine Classic has been the Nike showcase meet and the Adidas Grand Prix has been the, uh, Adidas showcase meet, there has been a little cross pollination this year. One noticeable example of this was Nike athlete Shannon Rowbury passing on Pre and showing up on the startlist of the very strong women's 1500m at Adidas. The field is stacked with top Americans Jenny Simpson, Anna Pierce, Molly Huddle, Morgan Uceny, Treniere Moser and Brie Felnagle, as well as Kenya's (via OTC) Sally Kipyego, Jamaica's Kenia Sinclair, Britain's Hannah England and Ethiopia's Gelete Burka. Let's hope the Americans fight for the win and don't treat it like a championship race in a second pack like the sometimes do when too many of them get together.

Finally, the NCAA's are going on in Des Moines, IA. Not that they'd be taking away from either of the Diamond League meets, but it's just another great event going on where we should be showcasing our collegians. I know getting events planned in New York City is tough, but hopefully they'll take that into consideration next year as dividing up an already small market share isn't helping anyone. One thing to take note of specifically at the NCAA meet is how strong the men's 400 is going to be. Florida's Tony McQuay ran a time in the semi's (44.87) that would have won Pre by a few steps last week, and that it took 45.51 just to make the finals, a time that would have gotten you 3rd at Pre, a Diamond League meet. Just an example of the talent we have in the university system.

All complaining about having too much to watch, you better bet I'll be watching as much as I can. I've already moved an engagement Saturday back an hour so that I can watch all of the Adidas Grand Prix and have DVR'd every showing of the NCAA's and Oslo, just in case I miss something. So happy viewing folks, enjoy it while it lasts as we have a few weeks off after this to prepare for the USA Championships!

Email ThisBlogThis!Share to TwitterShare to FacebookShare to Pinterest
Labels: Diamond League, My 2 Spikes Worth, NCAA Track and Field Championships