On the eve of the start of the NCAA Division I Track and Field Championships, on paper, the Men's 1500 looks like one of the strongest events. With seasoned 2009 World Championships qualifier Dorian Ulrey of Arkansas leading the way in terms of PR's (3:35.23), the men of Oregon (AJ Acosta and Matt Centrowitz) and BYU's emerging star, Indoor Mile NCAA Champion Miles Batty, will be right on his tail as the event is going to take quite a performance (or a 52 second final lap, if tactical) to win, or even make the podium.

Centrowitz has a PR of 3:36.92, has looked excellent lately and has been there before, leading up the home straight last year before being passed at the tape by his teammates Andrew Wheating and AJ Acosta; completing a podium sweep for Oregon.

Acosta hasn't looked as sharp this year, but does have a PR of 3:36.48 and his coach, Vin Lannana, has mentioned that Acosta is training for a long season that should last well into the Summer. Acosta did look great coming from way back two weeks ago at the regional, so maybe he's rounding into form at the right time. Anytime you can kick home in 53 or better, you're in an excellent position to win.

BYU's Miles Batty is the new kid on the block this year, having an excellent indoor season where he took the NCAA title in the mile and then placed third behind Russell Brown, Chris Solinksy and beat the rest of a star studded field at the Mt. Sac 1500 in a PR and 2011 collegiate leading time of 3:36.25.

At this point in the season, I'd have to give the edge to Matt Centrowitz, but it won't be easy and a strong field that includes Florida's Dumisani Hlaselo, Arkansas' Duncan Phillips, Montana State's Patrick Casey, Butler's Kris Gauson and Penn State's Ryan Foster amongst others could surprise!

The semifinals are Thursday at 6:15 Central and will be covered by Runnerspace and webcast on GoDrakeBulldogs.com. CBS and CBS Sports Network will have television coverage for many of the finals, including the 1500 Sunday at 12:18 Central. Live results are here

Below are the start lists for the semi's: 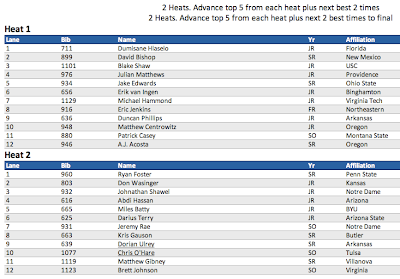 Update: Centro takes it! After a slow start, Oregon's Matt Centrowitz runs the last 1200 in a smoking 2:52 to pull away from Dorian Ulrey in the homestretch and then give a little "throat slash" to the cement his win. A little over the top? Sure, but always fun seeing people get pumped up, especially college kids. Great race and a sign of what he may have at USA's in a few weeks.