Race number 5 (of 6 to score) for the Second Empire Grand-Prix is in the books! Today was a nice bounce back after a lackluster effort last Saturday. The weather was cool and the course was deceivingly tough, but I was still able to throw down a decent time to hold serve in the Grand-Prix standings.

I got up to the race at Moore Square in Downtown Raleigh about 45 minutes before the gun and picked up my number and chip before heading out on an easy 1.5 mile jog with John Simons. Felt decent. Was a little worried as my runs this week consisted of an easy Sunday 9 miler with Mary Aiken Barrow, a moderate 6.5 miler Monday in Winston (with 2x800 pickups in the middle at just under 6:00 pace) and an easy 6 miler at Umstead on Thursday (with 2x800 and 8x100 strides at the end of the run). I threw in Ab Ripper X on Wednesday because my leg hurt too much from the pounding to run, but wanted to do something physical. 30 miles per week ain't gonna play if I want to run with the big boys, so I will focus this next week on healing before ramping it up again for my last Grand-Prix race and of course my return to the Boston Marathon.

Got in a few strides and got over to the start on Person Street. The whistle blew and we were off. I drove the course last night and realized there were a bunch of long, little hills. I wanted to make sure I had the juice to finish strong, so I went out fairly conservatively. About a half mile in, I was already a good ways behind John, Brent Hale and Rodney Scott and was a little worried I may not have it again. Started to dig in on the slight downhill and began to separate from the B-pack that was right on my tail. Hit the mile in 5:38-ish and made the turnaround at 2k into Mordecai to head back uphill. Mile 1.25 to 2.25 was the hardest section of the course, but I stuck to my plan and soldiered on past the 2 mile at 11:27 or so before the slow rolling last mile. I wasn't gaining much ground, but I wasn't losing any either. At 2.6 miles, I was at 15 flat. I really wanted to break 18 and knew I'd have to run a 3:00 last half mile and change for whatever tangents I didn't run (Garmin measured 3.12). This is when I shed my gloves and dug in. Started to gain ground on Rodney and made the last turn to hit the 3 mile in 17:25 and roll the last .12 at 4:52 pace (per the Garmin dump) to finish strong in 17:56 for 6th overall and 1st in the 30-34 age group.

I can stand strongly behind this race as my effort was strong mentally and physically and it was my 3rd consecutive 5k under 18 minutes (4th if you count my 17:51 solo tempo on the track). I will be able to hold onto 2nd in the Grand-Prix standings when they are released and have all but clinched top 5 barring a collapse at race #6 in 3 weeks (St. Timothy's Spring Sprint). Good day in Raleigh, NC!

For more info, check out: http://patprice.com/running/races/reports/20110312RunfortheOaks.htm 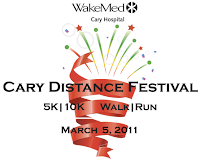 Saturday was one of those races that just never really felt right. I was excited about the race and drove the course Friday night to get a feel for it, but a few miles in, I realized I just didn't have it! Everything started off ok though. Got over to the race, picked up my number and John and I knocked out an easy 2 mile warm up on the course. Did my usual strides and an easy jog up to the line with a shake out stride and walk back to the start and was ready to roll. The whistle was blown to kick the race off and I got off the line well. John and I ran together for a very good first mile in 5:38-9 and were slowly picking those off that went out too fast. We hit the longest hill on the course on mile 2 up Maynard and that is where things started to go off track. 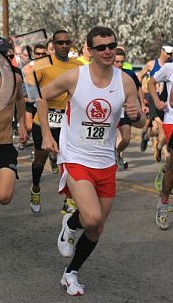 We made the turn at 2 miles in around 11:38 and this is where I started to fade. At first I wasn't worried as I thought I would catch a 2nd wind after the 2nd mile, but that never happened. 2 weeks of traveling and shotty training due to a dinged up shin and calf were starting to catch up with me. All the strength I had felt negative splitting my last few races and workouts was not there. During mile 3 about 4 guys passed me. I locked on to the back of the train and held on the best I could as we hit the 3 mile in 17:40 and 5k in 18:22 or so.

The second half of the course was back in some neighborhood behind downtown Cary. Lots of twists and turns including a 180 degree turn at around 4.5 miles had my right leg hurting pretty bad. I was getting slower, but couldn't do anything about it. Hit 4 miles in 23:58 and 5 miles in 30:15. This is not what I had planned! Chugged through the last mile and was able to get one scalp in there from a fading triathlete looking runner. Dug in the last 400 or so to finish 9th overall in 37:46 (and 2nd in my age group). Not my best day, but not a total loss.

The bright side of the race was that it was the 4th race of the Second Empire Grand-Prix and I was able to hold serve at 2nd overall (when they compile the results). I am liking my chances to finish top 5 overall (the ultimate goal) and will be happy to have a short break after next weeks Run for the Oaks 5k. Also, this course wasn't easy. It kicked my butt a lot more than I thought it would. Lots of hills, very windy and too many turns on the 2nd half, so a great strength workout at minimum. Finally, I don't love the time, but not too long ago it would have been a great one, so I'll accept that as a small victory to acknowledge how far I have come in just 2 years of competing!

For more info, check out: http://patprice.com/running/races/reports/20110305CaryDistanceFest.htm