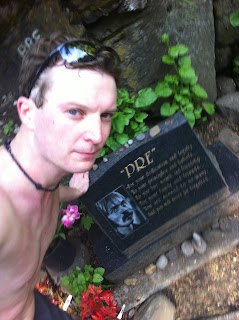 Even though the doc told me 4-6 more weeks of rehab on my shin splints last Monday, I have been running a couple days a week and would not be passing up a run in Eugene. Lucky for me, it was near 80 degrees, so I skinned up, through on the shades, tempos and Zensah sleeves for shin protection and headed out with my iPhone 4 in tow; like a running tourist.

Lucky for me, they had a map in my hotel lobby called "Track Town USA, A Runner's Map." Pretty awesome stuff. So I headed out the door in search of Pre's Trail. I was only about a quarter mile from it and was happy to get on it. It is about 4 miles of chipped woodbark that makes you feel like you are running on a putting green, only firmer. I circled around that a few times before heading onto campus towards Hayward. They were setting up for the meet and I crossed paths with another runner who stopped and asked a coed out on a date, to the track meet. Awesome!

After leaving campus, I set my sights on finding Pre's Rock and with the help of google and my iPhone maps, I climbed up Summit and found it right off of Birch on Skyline. Pretty surreal to see it and all the things people leave there. Let me tell you, those roads back there are pretty treacherous, so I can see how accidents may happen. After taking a few photos, realized I was already about 10 miles in, so headed back to the hotel, put on a shirt and picked up a personal pan pizza and a Pepsi at Track Town Pizza. I'll be going there after the meet for a beer as it is two doors down from my hotel!

Posted by Writing About Running at 8:40 PM