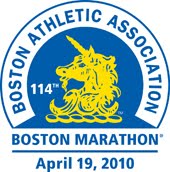 Qualifying for the Boston Marathon has always been a big goal for anyone who competes in running and making the trip to Boston for the race is quite like the pilgrimage in the religion of distance running. I have watched the Boston Marathon all my running life and this would be the first year I didn't get to watch, because I would be competing. I flew up Saturday and was greeted by many others wearing their Boston Marathon jackets at the Raleigh-Durham Airport. Just grabbed some pasta at the restaurant beside my hotel Saturday night and watched the Red Sox game on TV before calling it a night. Sunday I headed in town for the expo to get my race packet and coveted Boston Marathon jacket. I refused to wear it until I finished the race. To wear prematurely felt like wearing the shirt of the band you are going to see. Don't be that guy. Had a great dinner Sunday night at Puritan Pizza across from my hotel in Dorchester. Spaghetti with Italian sausage, Greek Salad, Garlic Bread and a Grape G2 for only $10. Watched a little TV and then went to bed at 10pm. 5am didn't come as early as usual as I slept great! Grabbed a bagel with PB & honey and hopped on the shuttle to the T. Rode that to Park St where the buses picked us up to take us to Hopkinton. The Athletes Village was much more subdued than that at the NYC Marathon & I brought the right stuff to relax (a poncho to lay on). Walked over to the start and got great position at the front of the 3rd corral. 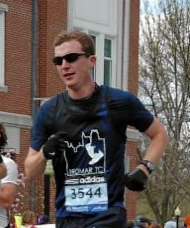 Stripped off my sweats and before you know it, we were off. The first few miles were straight down and really loosened me up. Probably went a shade too fast, but it felt easy and after some fatigue in the past month, I wasn't planning on trying to save anything as I knew the last part was going to be tough no matter what as I was only able to get one 20-miler in for this training cycle. The first landmark I remember was the biker bar on the left side of the road at about mile 2. Those folks were having some fun. Looked like the party you'd want to be at if you weren't running. Went through 5k in just over 19 and kept rolling along. Started to go uphill a little and hit the 10k in mid-38. Kept rolling along at 3:50 per K for a bit until we hit some hills around 10 miles. Wellesley was so loud. I had to move over a bit because it was deafening. Still put a huge smile on my face. Suburban Boston is really cool because it is so old. Every little town you would run through had it's own feel. Hit the half faster than planned at 1:22:16 and knew the hills were coming.

Immediately hit a long slow uphill at the half and could tell it was going to be tough when I got to Newton. Continued on and right about mile 15, the first of the Newton Hills was upon us. This one was long and slow and hurt! Leveled out for a second before the next one, which wasn't as bad. The 3rd hill came and went and I knew Heartbreak was coming. My quads were shot at this point from all the up and down, but I slugged up it without walking (as many were). Cemetery (down)hill was next and I got my legs back under me a little before the next hill that they don't tell you about. There were a few of these and I was just getting from water stop to water stop at this point. It wasn't the death march, but my lack of long runs and hills in Greenville certainly hurt me a little in this stage of the race. Passing the Citgo sign at mile 25 was great as I knew I was almost there. Chugged through the last mile and through the finish in 2:55:04, a new PR by 9:25. A great day and it gave me a lot of hope that I can really bust one when I truly train for a marathon and get better at the distance. Had to walk down some stairs to get a massage and that hurt, but then got to put on my well earned Boston Marathon jacket. A hard days work and it felt great to slip on! Also great were the kind folks at the Ramada Inn, who let me back into my room after checkout to take a shower and relax for 4 hours before my flight. Headed back to Logan International in fresh clothes, except for my jacket. Can't wait to get back next year with more of my friends in tow!
More info available at: http://patprice.com/running/races/reports/20100419BostonMarathon.htm

Posted by Writing About Running at 10:15 PM No comments: