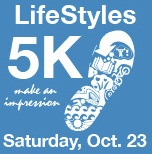 So believe it or not, my legs have been feeling very good after the marathon. Hamstring still hurts a bit, but everything else has been feeling A-OK just a few weeks out. I have been doing some swimming and have been following Hal Higdon's Post Marathon Training Guide to get back to where I need to be. I'll also be having my first A.R.T. session Friday to do some work on the hamstring. Thanks to Leo Manzano and my friend Scott Williams for the advice on that.

I had a tempo on the schedule today and saw there was a 5k in Little Washington that would suffice. I had run one race here before and it is a beautiful town on the inland coast about 30 minutes from Greenville. Figured it would be easier to try and throw 3-6 minute miles together in competition than by myself in Greenville during Homecoming. Last year I did my last 20 miler before NYC during the Homecoming Parade and accidentally ran over a drunk guy who was swaying on a bike at 18.5 miles (I couldn't sway at this point due to muscle memory). It was an excellent decision to head east. 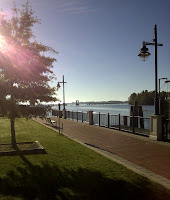 It was a little chilly this morning, clocking in somewhere around 40 degrees at the start. I wore some gloves until about a mile to go (that I luckily was able to recover on my cooldown). The race started (and finished) in the grass field beside the NC Estuarium on a gravel trail (similar to McAlpine Park in Charlotte) before heading off onto the slightly sloped roads of Washington. Went out pretty relaxed and hung behind a few younger guys for a half mile or so before they began to fade. After that it was just me, the lead biker and the volunteers with the pointing signs (and 2 unchained dogs that needed to get some strides in). Hit the mile in about 5:53 going over the bridge before heading onto a greenway path. Wasn't hearing as many footsteps at this point and the kind locals were cheering me along back to the bridge and 2 mile mark around 11:53. I crossed the bridge and was getting cheers from the people heading into the loop the first time while continuing to follow the lead biker down Main St. With about a half a mile left to go I threw off my gloves and picked it up a little before hitting the 3 mile in 17:48 and then finishing up in 18:22. 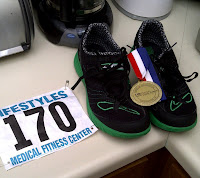 All in all, it was a nice run. Didn't kill myself, but ran strong only 13 days after the marathon and it was definitely exciting to win a race. Initially, I put on twitter that this was my first road race win since 1990. Well, it was actually 1991! The good ole Eastover Elementary Mile Fun Run. I also wore my new pair of Brooks Green Silence today. I have trained in the first edition of these for some track work, tempos and even a 22 miler at Umstead. I got the second edition via UPS yesterday from Running Warehouse and they felt great. A few minor modifications have been made that have made it a better shoe. Will look forward to doing more in them. Great day!

More info is available at: http://patprice.com/running/races/reports/20101023Lifestyles5k.htm

The Chicago Marathon has been very popular for its flat and fast route. It is also known for its very unpredictable weather. Last year it was 32 degrees at the start and 2 years ago it was over 80 by 11am. Fingers had been crossed for the cold, but we weren't so lucky. It was brutal!

Ever since Boston last year, I have been dealing with some hamstring issues. They would be ok for the first few miles of most runs, but would really bother me when I was running fast and racing. These issues had been plaguing me all season, but I kept running, stretching, getting massages and hoping for the best. After they bothered me a bunch during the Virginia Beach half, I thought of pulling the plug on Chicago, but I am glad I stuck it out and did it, as it was a tough mental challenge that I was happy to get through.

My teammate, John Simons, and I got out conservatively and went through the mile around 6:28. We picked it up slightly in mile 2 for a 6:18 or so. Mile 3 was more of the same around 6:20. At 5k, I felt a big pinch in my right hamstring. Hoping to run it out, I just kept trucking through a good second 5k to hit the 10k in a good, but conservative 39:40 or so. The pace didn't feel hard, I just had no pop in my stride because it hurt picking my right leg up. I continued to slow, but ran effectively through the half in 1:26:30 or so. This is when it got tough.

The second half of the race was outside the comfort of the shade of the buildings and the wind that whips between them. Crossing the bridge at the half I threw in a little surge just to see how my legs would react. It wasn't what I had hoped for. A quick half mile turned in to a slow second half before mile 14. The heat was beating down and I was limping around the south side of Chicago on a bum leg.

This was when I had to toughen up mentally. I knew that a PR was out the door. I knew that sub 3 was likely out the door as well as I had no action in my legs. I then knew a 2012 Boston Qualifier was on the line as Chicago qualifies for 2011 and 2012 because of where it falls in the calendar. With the pain I was in, the thought of doing another marathon to get me through 2012 was too painful to fathom. It was either make it through the last 11 or so at a decent enough clip to get me under 3:10:59 or try again later. I decided at this point to see what I was made of. When I made this decision, I could feel some strength in knowing I had an attainable goal out there that I could accomplish.

Now my splits from 30k to 40k are downright embarrassing, but the key was staying up, hydrating, not walking and getting to that next aid stop. It was a death march with a purpose! Luckily, when I hit 40k, my blistered feet and legs had gone numb and I just started moving faster. I was downright competitive in the last 1.6 miles or so and that felt good. I saw someone drop flat on the asphalt with 400 meters to go and I just put my head down, hammered up the last hill, then cruised in. Now my time was far from sexy or a PR (in 3:05:22), but I learned more about my pain threshold here than I did in New York last year or Boston in April.

Sometimes the will to keep going is just as important as the will to finish fast. Some dreams come true and some are nightmares, but the good part is that we get to wake up the next day and gain more fodder for these dreams. Looking forward, I can't wait to get this hamstring right and then run some shorter races. I didn't win the war, but I did win a battle. The marathon is a tough race and they all aren't going to be perfect. I just know next time, that if it gets tough again, I can handle it.

More info is available at: http://patprice.com/running/races/reports/20101010ChicagoMarathon.htm