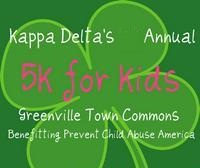 Decided to do this race last minute as I needed a tempo run this week and it was only $15. Was a chilly day, but sunny. Wore my toboggan, gloves, and shades, but no compression shorts today. Got out behind my buddy Nic Boerio again and he was killing the first mile (4:56). Had to go into my own pace early, which was still a shade too fast. Hit the mile in 5:28 before the all uphill second mile. I was once again in no mans land as I had opened up a gap on the 3rd runner. Running up the hill on 5th street was tough and once I hit the 2 mile in about 11:27-8, I started to pick it up. Got faster and faster on the last mile before hitting the last hill with 400 to go at 16:30. Sprinted the last hill then cruised through the last 250 meters or so to hit 17:53. First time under 18 since 1997!

For more info, check out: http://patprice.com/running/races/reports/20100220KD5k.htm

Posted by Writing About Running at 7:06 PM No comments: 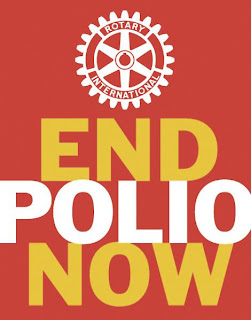 This was my first race of 2010 and I wasn't quite sure what to expect. Training had been going great and I was excited to see what I had in me after some good workouts and tempo runs. Drove down to little Washington the day of and the race started right by the NC Estuarium on the water. It was 30-ish degrees and a little windy so I wore my compression shorts with Nike Running Warehouse compression shirt, shades and my Remington toboggan (which was fitting as there was a Duck Call competition at the other end of the water). Ran into my buddy Nic Boerio at the start and knew he'd get out to a good start, so decided to follow him. 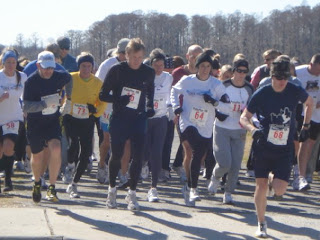 The gun went off and I hung with Nic for the first half mile or so at a good clip before easing into a good pace. Hit the mile at 5:32, maybe a little fast, but I felt good. This is where I encountered my first problem. At about 1.5 miles there was a road crossing. I see Nic go across chaperoned then I see the 2 volunteers just talking to each other as I approached. I said "little help" to get their attention 3 times and they awe shucks'd me and said I'd have to wait on the traffic. Screw that. I screamed at them "come on MF-ers, it's a road race. Do it right" before darting into traffic and entering the cemetery portion of the race (on a Sunday mind you). Classy, I know, but I was pissed. Shook it off and cruised by the 2 mile mark at 11:23. Gathered myself on a tough mile 3 before I started rolling again. Hit the 3 mile mark at 17:29 before rolling through a neighborhood and putting down a nice 5:46 4th mile (23:15) and then a 5:40 5th mile (28:55). Nic was way up and there was no one in sight behind me, so I just followed where the volunteers told me to go. 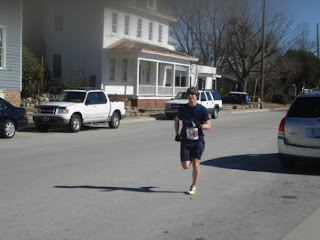 As I approached the waterfront, I realized I was getting closer to the finish than I thought. Damn, short course I thought. Sure enough, cruised through the finish in 33:44 and was very happy with my "36:27 10k effort" (as someone's GPS watch said 5.76 miles) but had a lot left because I didn't kick because the race ended before I thought to pick it up. I guess a race is a race, and I got 2nd overall and got some nice hardware to put on my fridge. Strong start to the year. If they tie the loose ends up, this will be a nice race as it is a beautiful course and had a great post race party on the water at Pirate's Pub.

Posted by Writing About Running at 9:44 AM No comments: