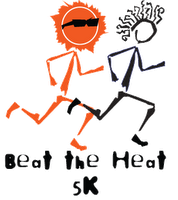 I decided to hop in this race a few days beforehand to see what kind of shape I was in and because it was the NC USATF 5k Road Championship. After coming in 8th in the USATF Road Mile Championship in the fall, I was hoping for another top 10. The course was described as "predominantly flat and fast." That must have been a joke. It had plenty of turns and hills and was anything but flat and fast. What was fast was the competition. I lined up upfront and when the gun went off there was quite a bit of pushing and shoving in the first 200 meters or so before starting to level out. The first hill came just 1/4 mile into the race and lasted for a half mile or so. Being on a program that is gearing me towards marathon success in the fall made the first mile in 5:30 seem much faster than it really was.

The second mile started up a hill before flattening out and then headed up that first hill again at about 1.5 miles. I was pretty cooked at running a fast pace at this point and just tucked in behind my Bromar teammate John Simons. Hit the 2 mile about 11:22 at the end of the long hill before a flat stretch before the last big hill heading up to 2.5 miles or so. My recent strength training began to pay off here as I began to roll past people on the last hill. The last half mile was fairly downhill, but I really couldn't get my legs turning over like I did at the Get Your Rear in Gear 5k in March. I was able to muster a little bit of a kick over the last 50 meters or so to pass 1-2 more people to finish 31st overall and 12th in the USATF comp in 17:44. This was only 15 seconds off my best since I began competing again and was significantly faster than my training has been. It was also a treat having my whole club there competing (Bromar Track Club). The race was well put on and the post-race spread was nice as well with tons of water, fruit, pizza and (free) beer. This will likely be an annual event!

I had a great time running this race last year and decided last minute to hop in again this year in lieu of a scheduled tempo run because the weather was so nice. This year proved to be a good one again. The race got out pretty quick and my legs weren't ready to hammer too hard after racing the mile on Tuesday and doing a fast workout on Thursday. No matter, that wasn't the goal. Let the first group go and tucked in with a guy to roll together through the mile in 5:41-5:42 up Hillsborough.

Lots of turns in the second mile as we wove through the neighborhood between NC State and Cameron Village. Passed one guy about 1.5 miles and ran the tangents of the course really well. Hit the 2 mile around 11:36 and kept trucking up Peace toward the big uphill on West Park. My legs were pretty beat up at this point, but I held serve and went through the 3 mile in 17:35-36. The last mile hurt more than it should have. It started up the hill on West Park and then up the last hill before the finish on Hillsborough. Couldn't really get the legs turning over until the last 400 which I ran in 80 or so to finish in 23:34. This was 36 seconds faster than last year and I felt I didn't have quite as good of race. Nice weather and a well run race. If I'm in Raleigh over the 4th, I'll be doing this one again.