Hobby Jogging: Bowing out of Boston

It comes with great regret and after some intense evaluation, that I have withdrawn my entry to the 115th Boston Marathon next Monday (April 18, 2011). In the past few months, I have tried everything, but just can't shake the injury bug. What started as a hamstring issue has turned into Piriformis Syndrome and a severe case of shin splints that have just refused to heal, even after backing off my mileage by 50% (or more on some weeks).

The last straw was this Friday's easy run. On Wednesday, I soldiered through a 3 mile tempo run at the Hanes Park track in 17:55, shins hurting every step of the way. Post workout, I just hoped that if I gave myself Thursday off and then went on an easy run Friday, followed up by my 10 days out staple of 10 Yasso 800's over the weekend, I would be ok. This didn't happen. I got 15 seconds out the door on Friday before I had to stop and come back to hit the foam roller and Trigger Point Massage Ball. I then tried again and it hurt like something awful. 2.25 miles in I stopped and walked home. This is when it started to become clear that a lousy day or a DNF could be in my future. I held out hope that I would feel better Saturday or Sunday, but it didn't happen. Quite frankly, it hurts to walk up and down stairs and the thought of running on it truly feels like getting "kicked in the shins." With all this in mind, I decided to send the dreaded email to BAA withdrawing my entry, then cancelling my room at the Dorchester Ramada and cancelling my flight on Delta. A sad day, but I think the smart decision in the long run.

I have been running competitively again for just over two years and it's pretty tough having to say no to Boston, where I would have given an arm and leg to run after I was completely humbled in my first marathon in November 2008, where I walk/jogged the second half to finish in 3:56. I feel bad for all of the people that train there a$$es off and can't seem to qualify. I feel a little empty that I won't get to go and hang out with my fellow track dorks for a few days. I feel like I let my training partner from Greenville, Tyler Pake, down a little as we were planning on racing together as our PR's are 8 seconds apart. But all the negatives aside, I feel relief.

Ever since Boston last year, where I had an incredible race, my right hamstring has been bothering me and I haven't truly given it a chance to heal. That's led to a lot of average races. I am ready to heal up and get back to above average racing; the kind I was doing before Boston last year. The only things I have on the books right now are the Triangle Race for the Cure on June 11 and the Ultimate Runner in Winston on June 25. If all goes well, I will make a dedicated attempt at a sub 5 mile this summer and will be ready to register for the 116th Boston Marathon in September. Until then, watch out for me at the American Tobacco Trail, Umstead Park or Salem Lake on my new mountain bike. After taking a week flat out off, I'll start doing some rides while the rest of me heals.

Most importantly, good luck to all those who are running. The Boston Marathon is my favorite race and before I ran it last year, I would take off work for a few hours to go home and watch it. It is truly an awesome event that I hate to miss, but sometimes, being a fan is just as fun. I'll be back, and hopefully on a better set of sticks!

Posted by Writing About Running at 7:43 PM 4 comments:

So this was it. Race number six in the Second Empire Grand-Prix. One last chance to lay one down to solidify my claim to the top 5 in the overall standings. That's about all I did today. Didn't feel great, didn't feel terrible, but did what I needed to do to hold serve to secure an overall podium spot at the Second Empire Awards Luncheon in June. The St. Timothy's Spring Sprint is no doubt, the hardest 5k course in Raleigh. I rode what I thought was the course Friday afternoon (per the USATF Course Map), but once the gun went off and we made the second turn, I realized it was totally different.

After battling some injuries, I have finally gotten in a few weeks of decent training. Now I am not out of the woods just yet with some serious shin splints being the injury du jour, but some of the hamstring pain has subsided and lots of rolling around on a tennis ball has dulled the literal pain in my a$$ that is Piriformis syndrome. I am hoping this bodes well for my upcoming return date with the Boston Marathon. It could be a nightmare, but if you know me, you know I will be going in with a positive outlook!

Got to the race about 45 minutes early and did an easy 2 mile jog with John Simons. Knocked out a few strides and got to the line with hopes that my shins would make it. I felt great doing some Yasso 800's Tuesday, but during my recovery lap jogs, my shins would kill. They felt ok on the flats, but hurt on the hills. And there were a ton of hills. About a half mile in, we started climbing for the first time. Over 200 feet in that next half mile before a short, steep downhill at the mile. Got through the first mile in 5:35 or so and didn't feel great, but kept slogging along, picking off some of the high schoolers. At the turnaround, I was slowing and two people passed me.

Getting passed mid-race doesn't happen a whole lot these days as I keep a pretty steady pace, but today was one of those days. Did my best to latch onto the back of the train for the second half of the race before I had to dig deep and make a hard move that would make me feel warm inside and keep my man card intact. The second mile was hard and hilly and the third mile was worse. Per the garmin dump, my second and third miles were 6:02 and 6:03. Ouch! 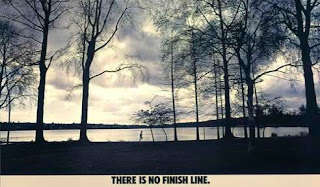 Now I have been beaten by plenty of women (and some girls) in my lifetime and it happens. No shame in it. Not this season though. As I trailed the lead woman over the last mile and a half, I was having a serious conversation with myself. "How bad do you want it?" was what I kept thinking as I slogged up the last 2 hills. When we got to about 1/4 mile to go, I started to pick it up. We then made the turn onto Rowan and I could see her just ahead, starting to struggle up the last hill. This is where I went for it. Sprinted the last 200 meters hard to pass the first female and finish 9th overall in 18:30 (although I had 18:26 on my watch). Tough day, but all the times were about 30 seconds slow, so I'll take it. Most importantly, I will hold onto 2nd place in the Grand-Prix standings and should finish no worse than 5th when the last 2 races are done and my competitors have gotten in their 6 scoring races.

All in all, I am happy with my efforts during the Grand-Prix series. My goal was to finish on the podium (top 5 overall) and it looks like that dream will become a reality. Now on to Boston. There is no finish line!

For more info, check out: http://patprice.com/running/races/reports/20110402StTimothys5k.htm

Posted by Writing About Running at 3:00 PM No comments: