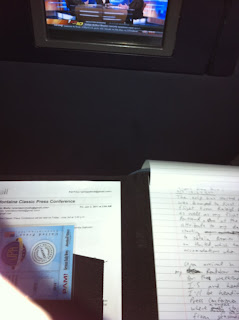 The trip out west to see this year's excellent Prefontaine Classic has started off well as I was bumped to first class on my flight from Raleigh to Houston and then again on my flight from Houston to Portland. Considering i've never flown first class before, this is pretty cool; one of the perks I can attribute to my day job, as upon starting this position I was able to obtain Premier Executive status on United, which translates into great accommodations when I decide to fly across the country to watch people run around in circles!

Upon arrival at PDX, I'll pick up my rental car for the weekend before getting onto the I-5 and heading south to Eugene. I'll be heading straight to the press conference at the Valley River Inn, where a handful of stars (of the many in town this weekend) will be taking questions from seasoned vets like the Oregonian's Ken Goe to noobs like myself.

The roster of athletes attending the presser includes international stars like Chinese hurdler Liu Xiang to tormented South African middle distance star Caster Semenya to Oscar Pistorius (aka Blade Runner). It will also include American stars David Oliver, Allyson Felix and the ageless Bernard Lagat. Finally, on hand will be two Eugene-based stars that have swiftly risen up the national (and international) ranks over the past few years, Ashton Eaton and Andrew Wheating.

I'll do my best to get some audio and photos before heading back to my hotel, going for a run on Pre's Trail and heading over to Hayward Field for "Distance Night in Eugene." Stay tuned... And if you are in Eugene this weekend, send me an email and we'll grab a slice and a beer at Track Town Pizza (WritingAboutRunning@gmail.com)

Posted by Writing About Running at 1:45 PM