After a rainout last night, the strong men's 10k will go off today at 4pm (5pm eastern) 5:30pm (6:30 eastern). There are three heavy favorites here with NCAA record holder Sam Chelanga (27:08) leading the way, followed by Arizona's Stephen Sambu (27:28) and Iona's Leonard Korir (27:29) not far behind. Chelanga hasn't been tested lately and you wonder whether he'll take it out hard, like he's done in cross country races or sit with the pack and try to outkick someone. These three's best bet would likely be a fast pace, as their talent is similar to that of the Miami Heat when compared to the rest of the field. If they choose to hang with the pack, it opens the door for the field, many of who are quite feisty like the Dallas Mavericks.

Maybe this is a bad analogy, because also in the field are Stanford's big three from Cross Country season (Chris Derrick, Jake Riley and Elliott Heath), but their PR's are far inferior on the track to Chelanga, Sambu and Korir, so maybe they will benefit from the underdog role. Heath is especially scary with the kick he has developed and started unleashing during the indoor season where he won the NCAA Championship 3000. If it's hot out there, don't expect anyone to move before 5k. Another one to watch is Florida State's Ciaran O'Lionaird, a fierce competitor with 3:40 1500 speed and a great long, driving kick that could steal the show if it's close with 1000 meters or so to go.

Finally, you can't forget about someone like Luke Puskedra, who is known to just open up a big gap and run his own race to try and leave the field. He hasn't had a ton of success with this tactic, but has finished in the top 5 twice at NCAA Cross Country nationals, so the field must keep their eye on him as he isn't afraid to push it, even if they weather is less than ideal.

The race will be streamed live by the NCAA here and live results are here. 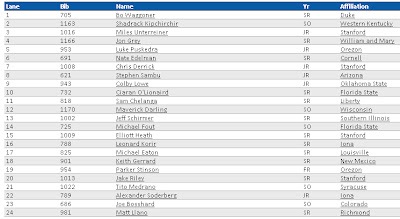