November 1, 2009 is a day I will always hold special. The New York Marathon was the first marathon I had really trained for and it was on what would have been my Grandmother's 83rd birthday. She had just passed away the week before and I would be channeling her for strength in those last 5 miles. Luckily, I persevered and achieved my goal of qualifying for the 2010 Boston Marathon. Not long after I finished and got my phone from the UPS trucks that had our personal belongings, I called a friend of mine in Raleigh who had been watching the race on Universal Sports. "Who won?" I asked, being a huge fan of the sport. "The American!" he said. "Ryan Hall?" I thought? "No, Meb. He left Robert Cheruiyot at Mile 22 or so." I couldn't believe it. I was one of those that had all but written Meb off on the world marathoning scene, but after reading "Run to Overcome," I should have never doubted him.

"Run to Overcome" is a nicely put together biography written by Meb himself with the help of ex-longtime USA Today Track & Field contributor Dick Patrick that will please new runners and experienced veterans alike. It is a genuine account in the vein of Tom Jordan's "Pre" that starts with Meb's childhood in Eritrea and his family's difficult trek to the States. Being a long time fan of Meb, "Run to Overcome" does a focused job of telling the story of his rise through the ranks in the US running system, starting with his outstanding San Diego High School career that ended with a 2nd place finish at the 1993 Foot Locker Cross Country Championship and would earn him a full scholarship to UCLA, where he would meet his longtime coach, Bob Larsen. For those unfamiliar with Meb's college career, he would win 4 national titles including the 5k/10k double on the track in the spring of 1997, followed by the cross country title later that fall. He would also go on to receive a bachelors degree in Communications, something that he is very proud of, even negotiating with Larsen to let him retake a Calculus class over the summer to better his GPA. 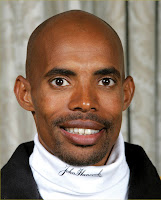 Where the book will please more serious runners is in the later chapters where Meb divulges some of the tough aspects of being a professional runner and he pulls back the curtain a little to show how that side of the business works, and how he has been affected by it. Meb also shares what goes into a typical training week and some other key components (weights/core/diet/massage) that have kept him world class into his mid thirties. What makes this book excellent is the fact that Meb doesn't shy away from his failures and uses each of them as fuel for his next achievement. He mentions a goal that has eluded him is a Boston Marathon victory. I, for one, hope he lines up with me again in 2011 to take it to the Newton Hills one more time before preparing for the 2012 Olympic Marathon Trials in Houston!

Be sure to check out RuntoOvercome.com for more information and order your copy of "Run to Overcome" on Amazon.com here)