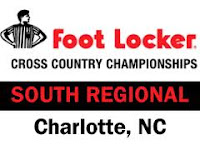 Being from Charlotte, during high school I either ran in the Foot Locker Cross Country Championships or worked at them from 9th grade on. I even did my high school senior exit project about the event as at the time it was the only true high school national championship. It was fun coming back and running them at 32, even though it wasn't really my day. I've been training pretty hard for the past few weeks getting ready for my last race of 2010, which is the Reindeer Dash for Cash 5k in Greenville next Sunday. Hopping in the open race at Foot Locker South seemed like a great idea...

It started off as a great idea. Felt pretty good after waking up at 6 to grab a shower, Powerbar and some water. Drove over to McAlpine Park and got in a good warmup with my buddy David Willis. Got lined up right in the "trail" section of the start and everything was looking good. Gun went off and I settled in to a good, but not too fast pace. Went through the 800 in 2:47-ish, 1000 in 3:28 or so and the mile in 5:37-38 and felt great. Was picking people off and felt well within myself. Kept cruising through the 2000 and that's when things got off on the wrong foot. The hill absolutely ruined my race. The insane drop off downhill at about the halfway point took a little bit to recover from. I ran the hill wrong and too slow and didn't get my way about me until about a k to go. If you look at the Garmin dump (and ignore where it dropped out of coverage), you can see I was rolling the first 2k and the last k. 2-4k were not my finest. Finished the last 200 strong to hold off a few challengers in a modest 18:26 (5:38, 6:05, 6:02).

That's ok. Just another piece of the puzzle. Had a good time watching the races with Dave after ours was done and was happy to see Raleigh's Wesley Frazier qualify again on the girls side as well as future Tar Heel Blake Williams qualify on the guys side (along with Scott Morgan and Thomas Graham). A strong NC showing. Now back to business for one more week before my last race of the year!