The schedule I have been following post-marathon has been great. My legs are coming back to life and thanks to Heather at Back to Basics, my hamstring is too. I had a tempo on the schedule today, but opted to run the Free to Breathe 5k in Raleigh as I knew there would be some competition, being that it was part of the Second Empire Grand-Prix Series. Goal was to run a little faster than my last 5k and hopefully be in the 17:45-18:00 range. This felt like a safe goal considering I haven't done any real speedwork aside from a few mile repeats. I nearly missed the race...

I misjudged my warmup a little and found myself with 4 minutes to spare and about a half mile to the starting line. After finishing my strides and changing into my race gear and flats, I hustled over to the line, probably too fast, but made it about 30 seconds before the gun went off. I got off the line well (as my heart was beating fast for fear of missing the start) and then settled in about 200-300 meters in before the first hill. The first mile has 3-4 good climbs and I was hoping to go through around 5:45-5:50. Thought I heard 5:48,49 at the mile mark, but it was 5:28, 29. Ouch, too fast, but I was competing. This is where it got weird.

I rode the course 3 times last night to get a feel for the hills. I generally do well on hilly courses, but less than 4 weeks out from the marathon, I wanted to prepare myself mentally for where it would hurt. Right after the mile, I was probably in the top 15 or so and was ready to run the down and up part of Oval Dr. After running the tangents to the T on mile one, I angled to hit right and cut the corner perfectly. One problem, the police car went left and everyone followed him, cutting approximately 600 meters off the course. At this point, it was time to just compete and run well on the downhill section.

Went through the 2 mile in 9:29, a 4 flat second mile! I'm the man! Haha, I knew what was going on. Now my goal was to break 16. Was it really breaking 16? No, but sometimes you can get in the top corrals of other good races with times like these. Was it my fault they screwed up the race? No. Might as well take it for what it is. I paid $30 to run ~2.7 miles (UPDATE: Race Director remeasure was 4.34k)! With that in mind I rolled the next half mile and then hit the half mile to go sign with one final hill. This one hurt and I was competing with one other guy at this point. I was laboring and he passed me with 400 to go. I rallied and got it together for the last 100 meters to pass him back and finish 12th in 15:29. "PR"!

All the guys were kind of laughing it off in the shoot and no one seemed too mad. Seeing the joy on the masses faces when they came across the line was a lot of fun as I imagine most people aren't as geeky as I am and don't wear a Garmin to know something was up. "I PR'd by 2 minutes!" was heard often. 2 things I do know: I legitimately ran the first mile in sub 5:30 and the last 1.1 in 6 flat. The middle, who knows! Probably a 17:45-50-ish effort (UPDATE: A 17:50 effort according to race director remeasure).

After the race, cooled down with Aaron Hale and grabbed some bananas and bagels before throwing my compression pants and pullover on. It was pretty chilly this morning, but felt great to race in. Took 2nd in my age group on my last day as a 31 year old. Tomorrow will be my double sweet sixteen and I got an awesome cake of me sitting in a hot tub, one of my favorite pastimes! 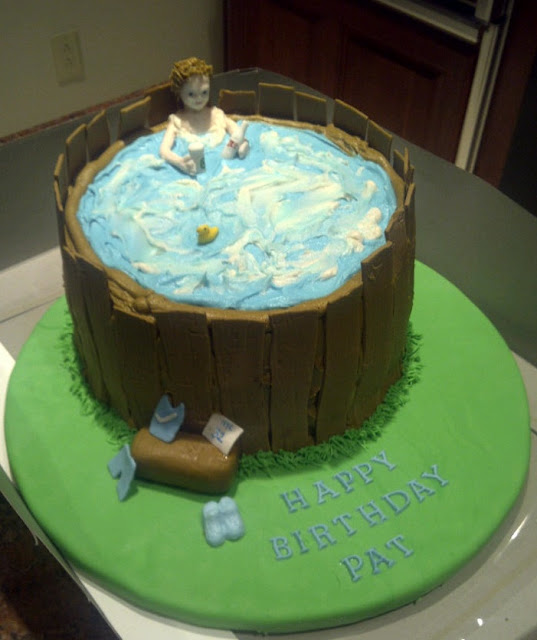 More info is available at: http://patprice.com/running/races/reports/20101106FreetoBreathe.htm