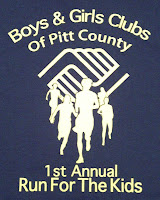 Last week was a short course and this week was a long one. Now it wasn't terribly long, but after driving the course a few times and racing it and then running it in reverse on my cooldown, it was a good 100 meters long (~20 seconds) if you cut the tangents as close as possible. Oh well, at the end of the day it's a race and that's truly all that matters unless you're on a track and you are told to run an extra lap (been there).

The Boys and Girls Clubs 5k was just another step in getting some speed back in my system after a summer and early fall of marathon training, with the goal to run some fast races in the Spring. I knew my legs would be a little heavy today after a race last weekend and a good 4 mile tempo on Wednesday with my friend Tyler Pake. All this in mind, I went in with a goal of 17:45-18:00, similar to last weekend. The race got out to a wild start as a high school kid sprinted off the line like nothing I had ever seen before. He had 100 yards on us within a quarter mile. Without racing the kid before, I had no idea what he was capable of, but kept it steady and watched him turn his head every 200 meters or so and look back (rookie mistake, but the kid was 15, so I'll give him a break!). Another guy was right on my shoulder and started to pull away from me a little before the mile mark. I went through in 5:39 or so and wanted to run a good sub 6 second mile. This course was out at Metrics Inc, which is some kind of industrial park in the middle of an old cotton field. It would be a good place for a tempo run, but not a great place for a race.

We had to run through a few parking lots and had to do a 180 degree turn right after the 2 mile mark. This being said, after running through a parking lot and by a cotton field I hit the 2 mile pretty strong in 11:32 (5:53 mile 2). The guy running with me earlier had just passed the high school kid and was pulling away with a very strong 2nd mile (about 100 yards up). Seeing this I made my goal to go get the kid. After the hairpin turn, the wind was right in our faces for the last mile or so but I was working it and caught the kid with about 600 left. I was really starting to dig in and the last mile kept going and going and going. I think the sponsor wanted to have it end at a certain place in their parking lot so that the finish would be right in front of the DJ and the moonwalk. This is Greenville, NC people! 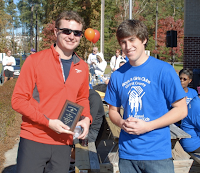 No worries though, I finished strong in 2nd in what I though was 18:08, about 9 seconds back from the winner.  Another quarter mile or so and I would have gotten him as he was fading and probably didn't know I was coming after he passed the kid earlier and he was blasting his headphones. About the 18:08, or 18:10 officially: every East Carolina Road Racing race I have ever run has been 2 seconds off of what they tell you at the finish line (and what my watch says) and what comes out on the results sheets. Again, not a huge deal, but a little bit of a pet peeve. I am guessing it is a software glitch as everyone else that frequents these races acknowledges it as well! My old high school friend who lives in Greenville now, Brandy Gamboa (pictured below), who won the womens race joked about it before what she thought was a 19:48 PR quickly turned into a 19:51. 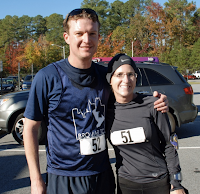 All nit-picking aside, this was a well put together race. Kip Sloan does a great job and was nice enough to email me the map this week (as he does with about every race I run down here so I can study the courses I am not familiar with). The post race spread was awesome with Jimmy Johns subs, Gatorade bottles, Powerade Bottles, Goldfish and Bruegger's Bagels. They also had great looking shirts (a rarity) and excellent awards, as I got a nice plaque to hang on the wall. They did have an interesting DJ at the finish, but that's a whole 'nother story I'll have to tell you about in person! 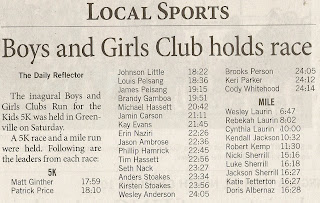