When I started running again in 2008, there was an article I distinctly remembered reading about a guy who had pretty similar high school running credentials to mine and then had gotten into some trouble while attending the University of North Carolina, ultimately getting back into running later in his 20’s with a great deal of success. This article was Jeff Pearlman's Runner’s World profile on Greensboro’s Charlie Engle. Now while my twenties weren’t nearly as wild as Charlie’s were, running was something that took a back seat to "socializing" and then came back into play around my 30th birthday. So when the opening scenes of the film showed Charlie running on Irwin Belk Track at Fetzer Field and in the Eddie Smith Field House, I was hooked.

All this being said, I found it shocking earlier this year when news surfaced that Charlie had been arrested for fraud as “IRS special agent Robert Nordlander began looking into Engle’s finances after reading a story about the ultramarathon across the desert and wondered how Engle could afford to pay for such an adventure.” This just goes to show, don’t try to cheat the IRS, “they read the newspaper.” 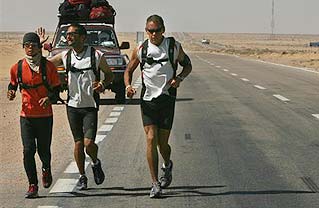 All this aside, “Running the Sahara” was an enjoyable documentary about Charlie, Ray Zahab, and Kevin Lin running over 4300 miles in 111 days across Africa, the equivalent of 170 marathons with no days off. Quite a feat to say the least! The cinematography was great as was the narration, which was done by Matt Damon, who also was an executive producer on the project. There were some expected testy moments as runners can get a little grumpy and running in sandstorms would likely make one extremely on edge. As you would expect, ultimately the three men and their crew soldiered through and they finished up at the Red Sea with a little daylight to spare (and with their friends and family looking on).

While admittedly I am a fan of the "bigger picture" Charlie Engle story and not just the movie, I can assure you “Running the Sahara” is worth a few hours of your time (and it is available on Netflix and on Showtime with regularity per the Track Superfan blog). Also, they started a charity, H2O Africa, that raises “awareness about the African water crisis, and facilitates cost-effective and impactful work that eradicates the problem in targeted regions of Africa.” They were able to secure a slot on the Jay Leno show to tell about their trek through Africa and to champion their noble cause.

And if you are interested in following Charlie’s case, he’ll be sentenced January 10th and has just written an excellent note over on his blog and tweets occasionally as well. Best of luck to him in a tough situation. It sounds like he is pretty remorseful of what happened and is doing his best to make the best out of a difficult situation.

Pick up "Running the Sahara" on Amazon.com here.

Sentencing Update: Charlie got 21 months today (1/10/11). Probably about as best as he could hope for. Here's the link to the story

Check out the trailer for "Running the Sahara" here: