This is the eighth installment of "Talking Trials." There will be more to come every day during the 2012 USA Olympic Track and Field Trials from Hayward Field on the University of Oregon campus in Eugene, OR. Full results for the trials are here.

You're not supposed to cheer from the press box. I wouldn't necessarily say I was cheering, but providing words of encouragement for a cramping Julia Lucas as she gutted out a painful last 50 meters of the Women's 5000 final Thursday night, eventually getting out-leaned by a hard charging Kim Conley. Julie Culley outkicked American Record Holder Molly Huddle before the drama for third. You've likely seen it by now, but if you haven't, here's the link to watch the race. Keep in mind, if it would have been a tie, like in the 100 hurdles, there could have been a 5000 runoff. That would have been worth a pay per view special to me. 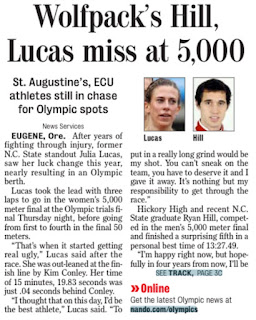 Lucas is from Charlotte, as am I, and I would be covering her for the Charlotte Observer and the Raleigh News & Observer, as she went to NC State in Raleigh. I've never met Julia, as she's five years younger, but it's not hard to pull for someone that has been through so much and lays it out like that, only to fall .04 seconds short of an Olympic berth.

And as tough as it was to watch, she handled it with class. "I completely went underwater" said an exhausted Lucas afterwards. "I gave that race away." No one would have blamed her if she would have walked through the mix zone, without taking interviews, but she didn't. She talked for at least 15 minutes about the tough ending she faced.

Lucas' personal best going into this season was 15:33, a time run in 2008. Her 15:08 earlier this year at Payton Jordan was a major, major breakthrough. To be so close and to fall so short. "I didn't sense her until the last few meters. I thought this day I would be the best athlete. You can't fake it." No you can't. This one's tough to swallow, but Lucas has been facing adversity for years. She'll press on.

The Men's 5000 went almost to form, except of course, Galen Rupp battled back and beat one of the best of all time, Bernard Lagat, over the same last 50 meters that the Women's race was decided over. The fist pump he gave afterwards was that of pure joy, with a trace of relief.

"I'm on cloud nine right now" were Rupp's first words at the press conference. "It's a huge confidence boost for sure," he claimed in reference to outkicking Lagat.

Lagat's reaction was a little different "Our mission as a team is to bring back a medal, whether it's me, Lopez or Galen. I'm at 90% right now. I'll be at 100% in London."

In somewhat of a surprise, recent NC State graduate, Ryan Hill, had an excellent race and a strong last lap, where he went from seventh to a strong fifth in a personal best time of 13:27.49. "I'm still trying to decipher in my mind if I'm happy with that or not. You can always get fourth and third. Hopefully four years from now, it will be more like third," said a slightly surprised Hill at how well he closed on the leaders over the final 400 meters. "It's to Europe from here to go after that A standard for the World Championship next year." A great race by a guy with a bright future. Watch the race here.

The Men's Steeple has been looking for a new star since Anthony Famiglietti's reign and it looks like they may have two. Evan Jager, of the Jerry Schumacher group, has learned the event fast and is going to be a force internationally. His 8:17.40 in only his fourth steeple ever shows the kind of promise he has and the potential to compete with the east Africans for years to come. Donn Cabral was in his Princeton uniform during the prelims, and then a new Nike kit during the final. And luckily for Nike, he delivered with a runner up finish, making the London team. I ran into him later at the Wild Duck Cafe and he couldn't have been happier. He "donned" his Team USA sweats, while being surrounded by many of his college friends who had come out west to watch him compete. What a rush. Kyle Alcorn rounded out the team and left it all on the track; literally. Possibly a P&J sando. Watch the race here.

The Women's Steeple final concludes the evening tonight and if Emma Coburn doesn't win, I'll be shocked. She's extremely smooth and is likely a year away from challenging Jenny Simpson's American Record of 9:12.50. There's a big group behind her that will contend for those last two spots, including her Colorado teammate, 2012 NCAA National Champion Shalaya Kipp, 2010 NCAA Champion Bridget Franek, Delilah DiCrescenzo, Sara Hall, Stephanie Garcia and a steadily improving Ashley Higginson. The easy money would be on Kipp and Franek, but anything can go wrong in the steeple. We'll see later. Buckle up!

Support the site and start here when you shop on Amazon.com
Posted by Writing About Running at 4:06 PM