Talking Trials: Back to the Track

This is the seventh installment of "Talking Trials." There will be more to come every day during the 2012 USA Olympic Track and Field Trials from Hayward Field on the University of Oregon campus in Eugene, OR. Full results for the trials are here.

It's Thursday morning here in Eugene and track is back! The Flotrack/Brooks run was packed again and we were joined by Neely Spence and Shayla Houlihan, who just announced her retirement from the track, after a disappointing steeple preliminary heat on Monday. She didn't rule out the roads though, including a potential fall marathon. Best of luck to her. It just shows the intensity of the trials and the training these athletes have been putting in to excel to the fullest extent during these 10 days that come along only every four years. The grim reality is that many of the athletes running here this week will move on from the sport if things don't go their way. A true reminder that it's "do or die time."

The 1500 prelims will kick off this afternoon and they are stacked. Some excellent runners will not make the team and a few will likely not make the final. A few of the men and women are right on the outside looking in at the Olympic A Standard times and I wonder how that will affect the way the rounds are run. The stars should have no trouble getting through to the semis, but that's where it will get interesting.

The Men's Steeplechase final goes off later in the evening and six guys have the A standard. College standout Donn Cabral has had a very long season, but has a great kick and will contend. Dan Huling has the best PR in the field at 8:13.29 and looked good in the prelims. Kyle Alcorn has been very consistent this year and also always has a great last few laps. Evan Jager has only run three steeples ever now, but looked flawless in the prelims. He looks to be the obvious choice to take the win. Billy Nelson got in by the skin of his teeth on time (from the prelims), but is good at showing up in big races. Finally, Ben Bruce hasn't run great yet this year, but is a tough competitor and will be in the mix. He could be rounding into shape at just the right time. The darkhorse pick will be Brian Olinger. Olinger ran within a second of the A Standard last year before committing to the 10k and the marathon. He now is back steepling again and looked good on Monday. Expect him to make an honest push towards the podium like he did at the Marathon Trials. He'll stick his nose in it for as long as he can. If I had to pick the three, I'd go Jager, Alcorn, Huling, but would not be surprised if Cabral snuck by Huling if he is there with 400 to go.

The Women's 5000 final will send some new faces to London as American Record Holder Molly Huddle will look to make her first team and will bring two newcomers with her. My Charlotte roots will have me pulling for former Myers Park Mustang, Julia Lucas, as she continues to have an excellent season and incredible comeback. Also, Liz Maloy looked effortless in the prelims and looks to be in shape to do something big. Those are my top three, but I think Julie Culley has as good of a shot as any of those women. Lisa Uhl is already on the team in the 10,000, so I am not sure she'll contend, but we can't forget Magda either. She'll lay it all out there as she has in the past. Kim Conley, Emily Infeld and Abbey D'Agostino looked great in the prelims, yet lack the standard. In 2008, it took 15:02 to make the team, so if it's anything like that, the standard will come as the byproduct of a great race.

The Men's 5000 final will be interesting. On paper, Bernard Lagat, Galen Rupp and Lopez Lomong look like the cream of the crop, but Andrew Bumbalough looked great in the prelim and could break up that party. He can kick with the best of them and has run many more 5000's than Lomong, so his experience may help him. Ben True and Brent Vaughn looked good in the prelims, as did recent NC State graduate, Ryan Hill. Will they have enough to crack the podium? Maybe not, but will hopefully make it interesting.

Yesterday was the first truly nice day out here in Eugene, with the sun out and the temps around 70 degrees. Since my shin was hurting pretty good after Tuesday's double, I opted for a five mile walk around town to explore and take some photos. After that, we went out to Ninkasi Brewing Company for the Picky Bars event. It's been fun to watch the company grow since I bought my first batch in September of 2010 and all the Picky staffers were in attendance, including Lauren Fleshman and her husband Jesse Thomas and Stephanie Rothstein and her fiance' Ben Bruce. It's freaking science dude. 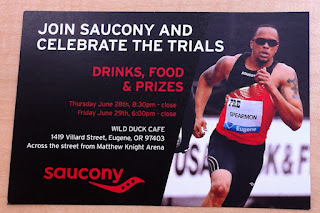 Later in the evening, after some table sports with the Tar Heel contingent, we headed out to Taylor's Bar & Grill, before capping off a low key night at the usual Wild Duck Cafe. For the next two days, Saucony will be hosting the post meet parties there and if it's anything like the first few nights, you won't want to miss it! Alright, off to the track. Tune in to NBC Sports Network tonight at 9pm eastern for some great action on the oval!

Here are some photos of my Eugene walkabout (taken with instagram):

Support the site and start here when you shop on Amazon.com
Posted by Writing About Running at 3:18 PM