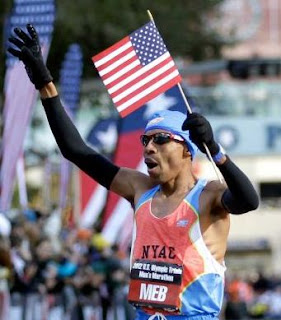 This will be the final article in the "Road to Houston" series. I hope you enjoyed them!

Final Trials Thoughts
The weekend in Houston was incredible. The trials were staged well and it was fun to watch. Aside from the streaming debacle, I think it was a success. I hope NBC remedies that for 2016. It was exciting to see Meb prevail after his disappointment in 2008, followed by the roller coaster that began with his win in NYC, his move from Nike to Skechers and his PR at NYC just two months ago.

It was also exciting to see fellow Tar Heel, Shalane Flanagan, take the win. Her past year and a half (or so) has been truly amazing and I believe it's safe to say now that her move from John Cook to Jerry Schumacher has been a complete success. It was also inspiring watching Amy Hastings throw down a power move when it looked like she was out of it. (Click here to check out the TwitVids that I recorded while on course)

Beyond the racing, it was nice to meet a lot of the athletes and the other kind folks in the running business. The sport of running has some nice people in it, and I'd especially like to the Richard Fannin from the Gate River Run for hosting an excellent after party at the Flying Saucer. Good times were had by all!

Fantasy Recap
The first fantasy draft was this fall for the NCAA Cross Country Championships and the league was stocked full of some of the most knowledgeable minds in track and field (that are readily available on Twitter). The field consisted of Jesse Squire, aka the Track Superfan, Kevin Liao from Spiked Up, Psyched Up, Chris Nickinson from Runnerspace, Ryan Fenton from Flotrack, Kevin Sully from the House of Run podcast, Jim McDannald from TrackFocus and myself. Liao won the Men's (and overall) and McDannald won the Women's. For the Olympic Trials, the tables would turn.

In the NCAA draft, we had seven rounds (of snake drafting) and five scored. For the trials, we also had seven rounds, but only four scored, due to excessive DNF's. For the next trials, we may need to draft eight, as there were even more DNF's than predicted.

The winner on the Men's side was Chris Nickinson. He had a solid squad whose scorers were Andrew Carlson (picked 6th, finished 6th), Abdi (picked 9th, finished 3rd), Josh Cox (picked 20th, finished 14th) and Drew Polley (picked 37th, finished 21st). Nickinson also took the overall win this year with a strong Women's performance. This was a strong comeback from his sixth place finish for NCAA XC. It should also be noted that Nickinson had prior obligations with Runnerspace the night of the draft, so he emailed me a depth chart. The depth chart delivered. I finished tied for second on the Men's side with the Track Superfan and my scoring squad was Meb (picked 2nd, won), Cabada (picked 13th, finished 7th), Max King (picked 27th, finished 19th) and Zach Hine (picked 41st, finished 31st).

The winner on the Women's side was Kevin Sully (with help from  Jason Halpin). That's correct, the two headed monster that is the House of Run went from seventh overall at NCAA XC to a Women's win at the Trials. Their scoring four were Amy Hastings (picked 4th, finished 4th), Katie McGregor (picked 11th, finished 11th), Linda Somers-Smith (picked 25th, finished 28th) and Camille Herron (picked 39th, finished 26th). I finished fifth on the Women's side with a scoring team of Magda, Zoila Gomez, Jen Houck and Alisha Williams, my steal, who I picked 37th and finished 14th. The Women's side was close though, and I took the overall bronze, two steps down from Nickinson, and one from runner-up, Ryan Fenton. Fenton is the only league member to podium in both competitions. I like forward to the next!