Bernard Lagat will be at Madison Square Garden this Saturday for his annual mile trek around the boards, only this time, it won't be for the Wanamaker Mile. It will be for the inaugural US Open, which has stacked fields in every event, from Asafa Powell versus Justin Gatlin in the Men's 50 to the return of Lolo Jones in the Women's 50 meter hurdles.

In the Men's Mile, Lagat leads the field with Daegu Silver Medalist, Silas Kiplagat, being the top contender to try to take down one of the best indoors runners ever. Also in the field are Ethiopia's Henok Legesse, Kenya's Daniel Kipchirchir Komen and Americans, Anthony "Fam" Famiglietti and Matt Elliott.

In the Women's Mile, it's an All American showdown with Anna Pierce leading the way and Daegu-bound  steeplechaser (before injury), Stephanie Garcia, Lauren Hagans and Brenda Martinez giving chase.


High school phenom Ajee Wilson, who just committed to Florida State, leads the Women's 800 and Bershawn Jackson and Renny Quow face off in their annual dual in the 600 yard dash. 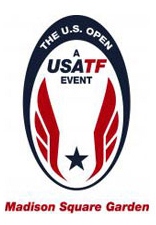 Full start lists are available here and the event is the first of the four part Visa Championship Series, which will also include the New Balance Indoor Grand Prix next weekend in Boston, the USA Track and Field Classic, which is the following weekend in Fayetteville, AR and the USATF Indoor Championships, which will be held February 25-26 in Albuquerque, NM. Not in the Visa Championship Series, but equally exciting, the "new" Millrose Games (at the Armory), is putting together a nice field, especially in the Men's 5000. More on that next week.

The full schedule for the US Open is available here. The event will air on ESPN2 this Sunday (on tape delay), from 7-9pm eastern.

Below are the qualifying standards for the USATF Indoor Championships: 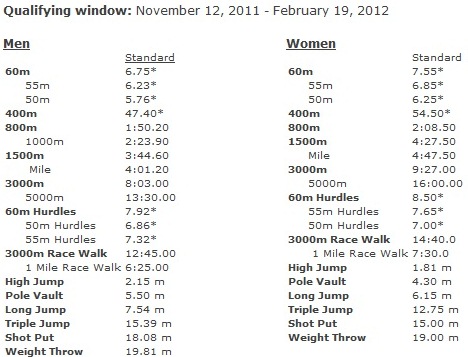