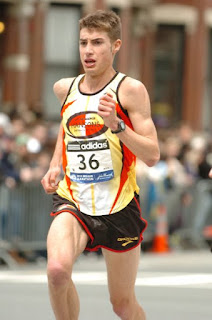 Today, we were lucky enough to have 5 Questions with Drew Polley, who runs for the Hansons-Brooks Distance Project, on his "Road to Houston." We'll have a few more of these features as we lead up to the big day on January 14, 2012.

Drew Polley ran for Washington State and is now running for the Hansons. Much of he and his teammates training for the Olympic Trials is on Flotrack's "Made In Detroit: A Hansons Brooks Series." He's currently with the team in Florida, prepping for the trials, which will be his third marathon. Follow him on Twitter here.

1. Writing About Running: You're part of the Hansons-Brooks Distance Project, but can you give us some background on where you went to college and your PR's coming out?

Drew Polley: I grow up in western Washington and ended up running for the mighty Cougs of Washington State University. I was actually very lucky the coach, Jason Drake, even let a scrub like me walk on the team. I knew I had some talent, but got a late start to running and had pretty modest high school credentials. I have a feeling my high school coach, Ed Santos, may have badgered him a bit. Fortunately, I improved more in college than anyone, including myself, probably expected me to. Eventually, I ran PR's of 29:26 in the 10,000 and 14:18 in the 5000. I also ran at NCAAs in cross country and got to be captain of the team. I considered those solid achievements for me, but I still wasn’t a big factor in the super-competitive Pac-10.

2. Writing About Running: What led you to joining the group and how's your time with the team been thus far?

Drew Polley: I was observant enough to notice that I raced much better at longer distances, could cruise through long runs and tempos, but regularly got dominated by baby-faced freshmen in speedy track workouts. I watched an older teammate qualify for the 2008 (2007) Olympic marathon trials and knew I had to take a shot at that myself after college. During my first semester of engineering grad school at WSU, I trained on my own and ran the Rock 'n' Roll San Antonio Marathon in November of 2009. The conditions were miserably hot and humid, and I just missed the Olympic Trials qualifying time. On the plus side, a magical combination of stubbornness and luck allowed me to beat a few decent guys and finish as the top American. Wearing my old WSU gear, I ran into a woman who was also a WSU grad, as well as the sister of Brooks’ elite athlete coordinator. She suggested I look into the Hansons-Brooks program, which I was already familiar with. I had never allowed myself to consider this route, but I realized I owed it to myself to at least look into it. The Hansons were more welcoming to me than I expected and suddenly I realized I’d continue to be a half-assed student and engineer until I got this running bug out of my system. I had a feeling that I still had more to achieve in the sport. The only hard part of the decision was telling my graduate advisors that I’d be giving up my graduate fellowship and not returning next semester. They were actually really pumped for me and even broke out some scotch to celebrate. Luckily, my first race as a Hansons-Brooks member, the 2010 Boston Marathon, went pretty well, a 2:16 PR and Olympic Trials qualifier, so they didn’t kick me off the team. It’s possible I’ve made them regret that, but I’m still here! I’ve had some ups and downs with injuries and performances over the last year and a half, but I’ve already had so many unforgettable competition and life experiences that I know I’ve made the right choice. And I haven’t even raced the trials yet, which has been the long-term focus.

3. Writing About Running: Those winters in Michigan seem pretty brutal. How are you enjoying the buildup in Florida right now?

Drew Polley: For a Northwest guy like me, snow has definitely shifted from a novelty to an eyesore in the last couple years. I’m sure it’s like anywhere else in the Midwest or Northeast; there are bad days, moderate days, and some miserable days. If nothing else, it certainly toughens you up for about anything. However, I’ll gladly trade those Bad-ass Points for the relative comfort of the Florida winter. Other than the obvious improvement in footing and weather, the biggest advantage of spending the last 5 weeks here might be the ability to focus on recovery between runs. Without work obligations or other distractions, we’re able to nap every day here and basically rest as much as we need to. In fact, I’m lying in bed right now. So in short, I love it.

4. Writing About Running: You're mentioned a good bit in Sage Canaday's book, "Running for the Hansons," was there anything he left out or anything you'd like to refute?

Drew Polley: I already harassed Sage into omitting some of the things he wrote in the original draft. He certainly has a creative mind, which doesn’t always reflect reality. I think his original draft mentioned something about me devouring two giant burritos, launching directly into a hard long run, and consequently breaking my heart-rate monitor due to extreme exertion. I’ve never owned a heart rate monitor nor have been known to eat large quantities of food. I actually was a little bummed to read his portrayal of me as gloating at the finish line of Boston 2010 when I finished ahead of him. I’ve never been big on intra-team competition and felt very bad for Sage’s rough day at that race. At the time I felt bad, anyway. Now I make fun of him constantly for it. Apparently I also have him fooled into thinking that I’m constantly going to the gym to work on core strength; I’m usually just sitting at Starbucks slamming chai tea lattes and creeping on Twitter.

Drew Polley: As I write this, I can honestly say that I am in the best shape – marathon shape anyway – of my life, which is exciting. The fact that my training partners and I have handled most of the workouts pretty well doesn’t change the goals we set at the beginning of the segment though. The Hanson bosses will tell you that it is important to stick to your plan and run your own race! Accordingly, I won’t be trying to stick with the leaders and hoping for the tiny chance of catching lightning. There is too much to lose by doing that and plenty to gain by running a more conservative race and turning some heads by finishing strong. I want to break 2:15 at the trials. I also want to finish high enough to make at least a few people say “who the #@*% is Drew Polley? I plan on finishing in the top 20. I think I can get in the top 15 on a good day. Having run only two marathons, I would interpret that as a sign that my progression is going well.

Posted by Writing About Running at 1:13 PM