Bookworm: "Haile Gebrselassie: The Greatest Runner of All Time" by Klaus Weidt

There's really no hiding it... "Haile Gebrselassie: The Greatest Runner of All Time" is German sportswriter Klaus Weidt's love letter to Ethiopia, Ethiopian distance running and his favorite runner and arguably the greatest distance runner of all time, Mr. Haile Gebrselassie. The book begins with Weidt and his German running travel group's searching for Mr. Gebrselassie in Ethiopia and then goes on to talk about Haile's upbringing and rise through the ranks of competitive distance running in Ethiopia (similar to the tale of his first marathon in the Disney film "Endurance"). Weidt then goes on to tell of Haile's big win in the 10,000 meters at the 1996 Atlanta Olympics; his repeat in Sydney in 2000 and his 2008 World Record setting marathon over the streets of Berlin in a stunning 2:03:59. 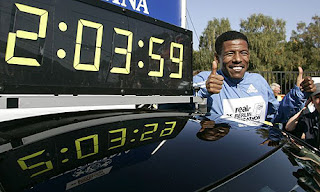 Weidt also speaks about Haile's business acumen and his desire to make Ethiopia a travel destination. As you read on, you realize how much of a treasure he is to the German (and Ethiopian) population. Weidt's earliest trek to Ethiopia began the German's first hand fascination with Ethiopian distance running and this particular group helped fund and build a school in Haile's village (aptly called "Marathon"). There's no telling how much more the Germans have helped fund Haile's empire over the years, including his hotel, Haile Resort, from his winnings, appearance fees and world record bonuses collected in the Fatherland.

While this book isn't necessarily written for an American audience, it does bring a great American running book to mind. "Haile Gebrselassie: The Greatest Runner of All Time" is loaded with great color pictures of Haile and of Ethiopia, very reminiscent of Tom Jordan's "Pre." The photos alone are worth the purchase of this 174 page quick read. There are plenty of great footnotes included as well that go beyond Haile's excellent IAAF profile of accomplishments. 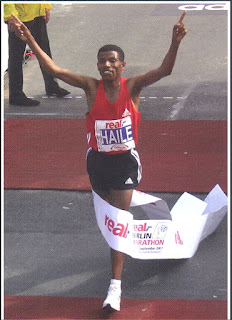 With all this in mind, it's tough not to forget Haile's tearful retirement after his allergy-plagued exit from the New York City Marathon this fall and his recent re-emergence in April at the Vienna City Half Marathon in Austria, where he won in a speedy 60:18. One has to think that Haile is targeting the 2012 London Marathon as his biggest goal and I for one hope he competes for the gold as he has been such a role model for distance runners across the world over the past 20 years.

You can order a copy of "Haile Gebrselassie: The Greatest Runner of All Time" on Amazon.com here

Posted by Writing About Running at 12:18 AM

Email ThisBlogThis!Share to TwitterShare to FacebookShare to Pinterest
Labels: Book Reviews, bookworm, Haile Gebrselassie: The Greatest Runner of All Time