Bookworm: "Running For The Hansons" by Sage Canaday

Where Chris Lear's "Running with the Buffaloes" did an excellent job of painting the picture of what it's like to train with a top notch collegiate program, Sage Canaday's "Running For The Hansons" does the same for the post-collegiate elite level. The subtitle of the book is "An Insider's Account of The Brooks-Sponsored Marathon Training Group Made Famous By Olympian Brian Sell," and that is exactly what Canaday delivers in his debut. While giving an excellent account of what it is like to train at 140 miles per week, week in and week out, Canaday also delivers some excellent prose on the joys and shortcomings of a professional running career and some hilarious commentary about the different kinds of customers that come into the Hansons Running Shops. The book also includes 100+ pages of extras that include Drew Polley's entire 15-week training log leading up to his 2:16 at the 2010 Boston Marathon and references to many of Sage's popular Flotrack videos. Lots of great stuff here for any competitive runner.

When I heard that Sage was putting this book out, I couldn't wait to get a hold of it as it finally pulls back the curtain a bit on how the decade plus long and very successful Brooks Hansons Distance Project operates. Many of the rumors that can be found on the LetsRun's "World Famous" Message Boards are true, including instant expulsion for dating a teammate of the opposite sex and a six figure guarantee for running a sub-28:00 10k or sub-2:11 marathon (a feat only achieved by Olympian Brian Sell and Desi Davila for the womens equivalent). It also talks about the 26.2k "Marathon Simulator" run that the Hansons do about a month out from a major marathon. You can tell how serious about the sport Kevin and Keith are in regards to their attention to detail for these simulator runs. They map out a course very similar to whatever marathon that the particular group is training for and even include homemade props that included Wellesley College and the Citgo Sign for their Boston simulator. 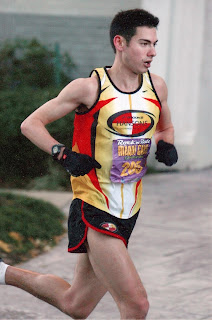 But despite all of the excellent inside information that "Running For The Hansons" provides, the book really finds it's heart in Canaday's tale of trying to hack it as a pro filled with older, more accomplished training partners and searching for balance as a young man in his early 20's, trying to figure out post-college life with an Ivy League degree, student loans and not quite the coed options that he left a year earlier on the Cornell campus. Canaday's self-deprecating sense of humor is rather refreshing and almost as good as his tale of he and Chad Johnson taking on (and beating) pair of Olympic Triathletes (Jarrod Shoemaker and Hunter Kemper) in the 2010 Walt Disney Half Marathon.

"They were arguably the best runners on the Olympic Distance Triathlon team. Despite that, there was no way in hell I was going to let myself lose to someone wearing a full-body suit!"

Awesome! Lines like this are what make this book great. Canaday is also not afraid to share his disappointment after having a rough day at the 2010 Boston Marathon and then regrouping, getting better and eventually qualifying for his second Olympic Trials at the 2011 Rock 'n' Roll Mardi Gras Half. He also has some excellent tales about hanging out in Vegas with Fernando Cabada, what Brian Sell does to save money on toilet paper and a day in the life at the "Bloomer House" (one of the Hansons Team's residence). All in all, an excellent read for anyone who wants to know what it takes to keep the dream going and for anyone that has wanted to see what's behind the Hansons magic!

You can order the book directly from Sage at his Vo2max Productions site or from here from Amazon.com

Posted by Writing About Running at 11:10 PM