We're lucky to have a new columnist at writing about running. Win Bassett serves as Executive Director of the North Carolina Brewers Guild and leads Social Media & Beer Education for All About Beer Magazine, in addition to writing for the magazine online and in print. He is also co-founder of ncbrewing.org. He's also a heck of a runner.

Win is a regular contributor to Serious Eats, Southern Brew News, SavorNC Magazine, and WRAL and has been published by the Brewers Association, Mountain Xpress, and the News & Observer. When he's not advocating for and writing about beer, find him running in the woods. Check out his website winbassett.com and follow him on Twitter @winbassett

He'll be leading the "Single-Tracks and Hop Backs" column here at writing about running, where he'll focus on trail running, beer, the vegan lifestyle and whatever else fits. Welcome to the party Win!

Without further adieu, here's Win's Rock2Rock race report (next up will be his review of Scott Jurek's new book):

Named one of Blue Ridge Outdoors' top trail races in the South and quickly gaining the cult status of its bigger brother, the Shut-In Ridge Run, the Rock 2 Rock Trail Run outside Asheville, NC, in Swannanoa is not just any off-road 10k. "You will not be able to run the entire course," writes organizers, and "[a] good estimate is to add about 60% on to your usual 10k time." This sounded accurate for the 2000 feet of ascent in the first 3 miles and 2000 feet of descent in the next 3 miles.

I decided to throw my hat in the ring after running some single-track in the area with Brian Simpson of Riverbend Malt House in Asheville. Brian has finished multiple Rock 2 Rocks and Shut-Ins, and he took me for an eye-, heart-, and mind-opening run from Bent Creek River Park just past the Arboretum in mid-April. No pavement, no car exhaust, no traffic lights. It was the closest that I've felt to the ground that I was covering.

Since then, I've been working out almost exclusively on single-track in Umstead State Park, with a few runs on the Mountains-to-Sea Trail from Falls Lake Dam in Raleigh, Little River Regional Park in Orange County, and Carolina North Forest in Chapel Hill. I've never felt stronger, and I've never been more happy running, despite the humbling splits I was putting down compared to my road times. That's why I couldn't wait for Rock 2 Rock to gauge my progress and potential as one of those guys that runs around mountains.

The race started at 5:00 p.m. on Friday, May 25, 2012, which throws another kink in the chain in my type-A personality world regarding the timing of my last pre-race workout and what I would eat. I did 7 miles on Company Mill Thursday morning and ate normally throughout the day. After checking in to pick up my bib and visor, which is a welcome change because everyone has more than enough race shirts, I warmed up for about a mile with Brian and Duncan Hoge from Bull City Track Club in Durham, who placed second in the race last year. I took a Raspberry Hammer Gel 15 minutes before the race and lined up about two rows back.

The race started on a grass field adjacent to a lake at the gorgeous Camp Rockmont. I was careful not to go out too fast, and it helped that my legs were still asleep. After a few hundred yards, the course took a turn onto a crushed-gravel fire road with some elevation, but the real uphill battle started about a quarter of a mile farther after a hairpin left onto some dirt double-track.

Fortunately, as soon as I hit the double-track, my legs came to life, and I passed about 8 people on the way to the rocky single-track portion of the race. This section was also the walking section of the race. Despite putting down a respectable time running up Grandfather Mountain in The Bear last year, I never walked it, but I later learned I could have saved some running economy. I didn't make that mistake in Rock 2 Rock. I put my hands on my knees (and even the ground at some points due to the steepness) to get up that mountain and passed another 4 to 6 runners. My mile-3 split was 21:37, and I was not ashamed.

I thought I was at the top after climbing the face of a rather large rock with a photographer on it due to pictures I had seen on the Rock 2 Rock website, but I was wrong. The trail went downhill for about a hundred yards and then started to climb again at a steepness just as before. After passing one more person, I finally reached Eden Rock, the high point, at roughly 3.5 miles into the race. This was the single water station, but I passed without pausing. The volunteers noted, however, that they had left the cups out the night before, and a few bears seemed to have appreciated the gesture.

No sooner than tackling the face of the rock did the course immediately take a turn downhill into some extremely tight, technical single-track. And when I say downhill, I mean downhill. Perhaps the most damage to my body during the course of the race was to my hands from hanging and swinging on trees on my way down in an effort from rolling down the side of a mountain. The second half of the race was a lovely break for my lungs, but now was the time for my legs to hold up and really come through. Gravity almost works against my light frame. I can float uphills but often lose time on the downhills.

I let go with all abandon, however, and did everything I could to stay upright. After Eden Rock, I never saw or heard another soul, so I didn't have a rabbit to chase down or to push me. After the steep, downhill single-track under the canopy let up, a cobblestone and mountain bike jump-ridden double-track took over, which presented another set of challenges. Don't roll my ankle on the big rocks and don't buckle my legs after jumping off the ramps that were just large enough not hit in stride. Eventually, the double-track opened back into the crushed-gravel fire road on the other side of the camp, and the race finished about half of a mile later after a hairpin turn at the starting lake. I crossed the line at 51:49, and I knew a few folks had crossed the line before me, but I wasn't sure how many. Scott Williams, a local runner and fellow beer lover known to tear up the trails and roads around western North Carolina, mentioned that he thought I was fifth as he cheered others on at the finish.

After scarfing down a banana and rehydrating, I stuck around for the awards with Duncan and received a sweet Rock 2 Rock pint glass for taking 3rd in the 20-29 age group. I ended up 5th overall. Tough age group, huh? Duncan ended up 2nd in 20-29 and 3rd overall, and Brian finished at a solid 22nd overall. Roger Price, the father of Writing About Running's founder, finished in 1:19 for 62nd. It was a pleasure to meet him, and I hope I'm still running that strong at 59!

Local mountain running star Shiloh Mielke (has run for Inov-8, Vasque, US Mountain Running Team, etc.) took the overall win despite not being the first to the top. That honor went to other local speedster Matt Morse. See the Rock2Rock website for full results. 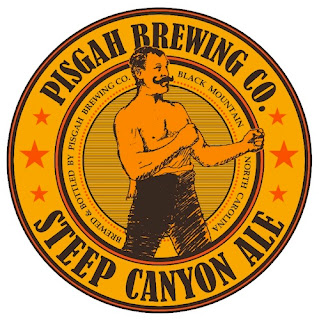 The western North Carolina race experience would not be complete, however, without a post-race visit to a local brewery. This is in the area of BeerCity, USA, after all, so Brian and I drove the two miles from the race finish to Pisgah Brewing Company in Black Mountain. Known for its line of all-organic brews, Pisgah has been fueling trail runners in the area with its flagship Pisgah Pale Ale since 2005. Brian and I grabbed pints of Pisgah's newest brew, Steep Canyon Ale, an extra pale ale brewed exclusively to celebrate the Steep Canyon Rangers.

It was wonderful to see that some of the top Rock 2 Rock finishers had the same idea. Some stayed for pints, and some, like 6th place finisher Paul Scouten, simply stopped by to pick up a growler of local beer for the Memorial Day weekend.

Local running, local beer, and local community. It doesn't get much better than that.

**Finally, looking for a place to stay while running in Black Mountain, NC and enjoying Pisgah Brewing Company? Check out the runner-friendly Stone Circle Cottage.

Thanks to our sponsor, Adharanand Finn's new book "Running with the Kenyans" for sponsoring the blog this week. Read my review of it here. If you're interested in sponsoring writing about running (and other great sites like TrackFocus, Track Superfan, Paul Merca, (new member) RunNova and the House of Run podcast) in the future, check out The Relay Network. You can also support the site by buying something on Amazon.com through this link
Posted by Writing About Running at 3:25 PM