Bookworm: "Running with the Kenyans" by Adharanand Finn 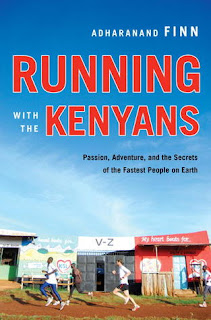 If you had the opportunity to take 6 months off of work to be able to head to Iten, Kenya to train and learn about the workings of the Kenyan runners, would you? Most of us would jump at it, and this is precisely what author Adharanand Finn did. Luckily, he documented this travels and learnings in his new book, "Running with the Kenyans." Finn is an assistant production editor for the British national daily newspaper, The Guardian and was given this special opportunity; one he took full advantage of and delivered an excellent read for fans of distance running worldwide.

Finn's book is filled in fact that while very fascinating, is also is filled with unearthed and often times, sad truths that tell of the not so wonderful tale of the magical Kenyans. Finn finds a friend in Toby Tanser (of the excellent book, "More Fire: How to Run the Kenyan Way") who quickly answers the question of why do Kenyan children run to school. "Are they hoping to become athletes?" asks Finn. "No, they're running because if they're late, they get caned." He also digs into the "age old" question of why many Kenyans official ages are less than their real age. "Each person has a different story, although it usually involves someone else, such as a manager, getting the date wrong at some point." That's one thing that is very evident. The managers are the ones in control of the Kenyan runners, as they operate the running camps, that are essentially tryouts to earn chances to compete internationally. Some run in the camps for years and never make more than a few hundred dollars, relying on the kindness and hospitality of family to help them along.


The most rewarding thing about Finn's 6 month journey to Kenya is his personal journey from 38 minute 10k runner to a very competent "mzungu (foreigner)," who is given incredible access to the who's who of the then and now of the storied Kenyan running scene. The people he met and ran with will any distance running fan's mind.

Read the blog that Finn kept while writing the book here (and then here) and be sure to follow him on Twitter @adharanand Finally, be sure to listen to his interview on the House of Run podcast.

Order your copy of "Running with the Kenyans" at Amazon.com here

Thanks to our sponsor (the above book), Adharanand Finn's new book "Running with the Kenyans" for sponsoring the blog this week. If you're interested in sponsoring writing about running (and other great sites like TrackFocus, Track Superfan, Paul Merca and the House of Run podcast) in the future, check out The Relay Network. You can also support the site by buying something on Amazon.com through this link
Posted by Writing About Running at 9:48 PM