37 years after the death of Steve Prefontaine, the Pre Classic lives on 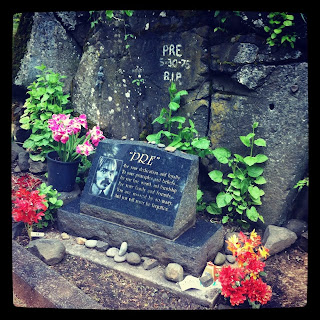 What was originally staged as the "Hayward Field Restoration Race" in 1975, the Prefontaine Classic, now in it's 38th year, continues to live on as the premier track and field event in America.

I was lucky enough to attend last year (and kept a journal my time in Eugene) and couldn't pass up the return trip to Eugene (via Portland) for the 2012 edition. If you're a track fan, this is something you need to see in person.

The distance action heats up Friday night with "Hollister Night at Hayward." The event is free to attend and will be webcast starting at 7:25pm Pacific (10:25pm Eastern) at PreClassic.com.

The Women's 800 kicks things off at 7:30pm with Molly Beckwith, Heather Kampf, Gena Gall, LaTavia Thomas, Alysia Montano and Maggie Vessey leading the way. This is the race that put Vessey on the map. Her win in 2009 out of nowhere paved the way to where she is now. Expect her to challenge for the win. This will also be an excellent chance to see where Montano's fitness is, as we haven't seen much out of her this year (yet).

The Men's International Mile is up next, at 7:37pm, with a stellar field of Americans, including Russell Brown, Matt Centrowitz, Will Leer, Jeff See, Dorian Ulrey and American Record Holder, Alan Webb (who set the American High School Record in 2001 here). Alfred Kirwa Yego, Nicholas Kemboi and Mohammed Shaween lead the foreign contingent. This event has become a new standard at Pre and expect the winner to be close to 3:50.

The Women's 1500 goes off at 7:46 with another excellent American field of Gabrielle Anderson, Katie Mackey, Lauren Johnson, Brenda Martinez, Treniere Moser, Anna Pierce, Shannon Rowbury, Jenny Simpson and Phoebe Wright. Sheila Reid, Jemma Simpson and Tizita Bogale will lead the foreign contingent. Simpson will try to regain the form that found her running 3:59.90 here in 2010, as much of the rest of the field will take aim at the Olympic A Standard of 4:06.00.

The Women's 10,000 is up next at 7:56pm. Expect Tirunesh Dibaba to go away with this one, but pay attention to Lauren Fleshman. She's been injured and is rabbiting. It will be a good chance to see what kind of form she's in before the trials. Alisha Williams will take aim at the Olympic A Standard of 31:45. She has the B right now and will want to get this out of the way before the Olympic Trials in 3 weeks. (Nevermind, she was just rabbiting through 3000)

Closing out the night is the ballyhooed Kenyan Olympic Trials in the 10,000. Athletics Kenya decided to stage it here due to the similarity in elevation to London and it should be quite a run. The top two will qualify, with the last choice going to the committee. 10 of the Men entered have run under 27 minutes and I would expect this race to be won in the 26:45 range. Micah Kogo and Eliud Kipchoge seem to be the favorites, but it's Kenya. There are new stars emerging yearly. Expect the unexpected. I'll be pulling for "36 year old" Mark Kiptoo.

The 38th Annual Prefontaine Classic goes off Saturday, as usual, with excellent sprints, distance and field events. It will be broadcast at noon Pacific (3pm Eastern) on NBC. The Women's Steeplechase kicks off the distance events at 11:46am with Emma Coburn, Bridget Franek and Sara Hall lining up against the best in the world. Milcah Chemos looks to be the ace of the field. Coburn and Franek went 1-2 last year at USA Outdoors and look to be the favorites to make the team once again. Hall has yet to show the form that she showed towards the end of the 2011 season. This will be her chance to show whether or not she's a threat to make the team.

The Women's 3000 goes off at 12:11pm with Jackie Areson, Angela Bizzarri, Brie Felnagle, Sally Kipyego, Molly Huddle, Lisa Uhl and Amy Hastings duking it out. Talk about an American distance fans dream race. This one should be a lot of fun.

The Men's 800 is next at 12:24pm with Nick Symmonds taking on the world's best (sans David Rudisha). Yuriy Borzakovskiy, Abubaker Kaki, Adam Kszczot, Mohammed Aman and Boaz Lalang will make it a tough one. Add Americans Khadevis Robinson and Tyler Mulder to the mix and you've got a very strong 800. Matt Scherer will lead them around.

The Men's 5000 is at 12:50pm with Matt Tegenkamp and Galen Rupp taking on an incredible field of Mo Farah, Kenenisa Bekele, Craig Mottram, Collis Birmingham, Isiah Koech, Sam Chelanga, Yenew Alamirew and Augustine Choge. Will Rupp go under 13:00 finally? and on American soil? He's gonna have to if he wants to compete in this field!

Closing out the classic will be the Bowerman Mile at 1:19pm. The American contingent will be comprised of Andrew Wheating, Leo Manzano, Lopez Lomong, David Torrence and Bernard Lagat. Silas Kiplagat, Asbel Kiprop Amine Laalou and Nick Willis will lead the world challengers. Kiprop's been tough here, but Kiplagat recently got the better of him in Doha. Expect a scorcher!

All in all, an event that Pre would be proud of!

I'll be tweeting and running around all over Eugene from Thursday night on... with stops at Track Town Pizza, Ninkasi Brewing, Pre's Trail, Rogue Public House, Morning Glory and of course, Hayward Field!

Thanks to our sponsor, Adharanand Finn's new book "Running with the Kenyans" for sponsoring the blog this week. Read my review of it here. If you're interested in sponsoring writing about running (and other great sites like TrackFocus, Track Superfan, Paul Merca, RunNova and the House of Run podcast) in the future, check out The Relay Network. You can also support the site by buying something on Amazon.com through this link
Posted by Writing About Running at 10:26 PM