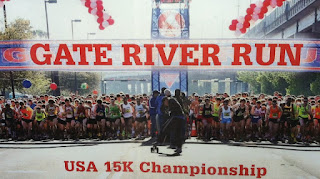 Today we have 5 Questions with the brains behind the first big United States Road Race (save the Marathon Trials) of the year and it is this Saturday in Jacksonville, FL. The Gate River Run 15k has a long history of being a target race for many American Elites before the start of Marathon season. We'll do a race preview later in the week, but today we were lucky to do an interview with the Elite Athlete Coordinator of the Gate River Run, Mr. Richard Fannin.

Richard Fannin is a self-described "running junkie," father of 5, native of Jacksonvile, Florida and coordinator of elite athletes for The Gate River Run, the US 15k Championship Road Race. The race will celebrate it's 35th running this year. I met Richard at his excellent post-race party at the Marathon Trials and his passion for the sport and it's athletes runs deep. Whether you are an elite or a hobby jogger like myself, I highly recommend making the trip down to Jacksonville to run the Gate River Run at some point in your life.

1. Writing About Running: What is your role with the race - and how did you get involved?

Richard Fannin: Doug Alred and his wife Jane are the co-race directors - and since 2009, my specific job responsibity is the coordinator of the elite athletes for the race. My father, along with a small group from the Jacksonville Track Club, founded the race in 1978, and I have had a vested interest in continuing his legacy with my involvement. In the late 70's and early 80's, I used to sit down with my dad with a stack of Runner's World magazines and Track and Field News lists, and compile our recruiting lists for the race. 30 years later, I am still doing the same thing.

2. Writing About Running: What changes did you make when you took over?

Richard Fannin: I joke that I was "already starting on 3rd base" as we already had one of the greatest fields - if not the greatest - in American roadracing when I started. But one objective I had was to try to make the field even deeper. In 2009, we started our first competitive team competition - known as "The Tenbroeck Cup" - named after John Tenbroeck, a tireless volunteer for the track club who had passed away the previous year. Our team competition has a separate $20,000 prize structure - on top of the individual prize money. It has been successful beyond our wildest dreams, drawing teams such as Team USA Minnesota, McMillan Elite, Bay Area Track Club - and others. It has indeed made our fields deeper than ever ... in 2009, we had 13 women run under 52 minutes. Last year, we had 8 men under 44:00 and 21 under 45:00.

3. Writing About Running: Who are the top competitiors this year?

Richard Fannin: Mo Trafeh - who won in 2009, and 2010, is back - and going for the "threepeat". He has run exactly 42:58 each of the last 2 years - the 4th and 5th fastest times in the history of the race. He certainly looks to be the class of the field. We have another 15-16 men that could make it very interesting: Fasil Bizuneh, who always runs well here. Bobby Mack, who won the USATF cross country title last month. Scott Smith, who just ran a 63:18 half in Houston. Then another handful of young guys such as Nick Arciniaga, Sean Houseworth, Christo Landry, Jimmy Grabow, Matt Llano, Ben Bruce, and Tim Ritchie. Antonio Vega is also back from injury, running his first race in nearly 2 years. Rounding out the challengers are Sergio Reyes, Zach Hine, Mike Sayenko, Danny Mercado and Justin Young.

The women's race is very intruiging; former champions (and veterans) Katie McGregor and Blake Russell are running. Magdalena Lewy-Boulet is running as well. But some of the toughest challengers will be some women that are running our race for the first time. Molly Huddle, the American Record holder for 5,000 meters (14:44) is making a rare road appearance, and has to be considered a favorite. Janet Cherobon-Bawcom, who just was cleared as a US competitor in September, won all 3 races she ran on the circuit last fall, won the USATF road title for 2011, and just placed 5th - with a 2:29 - in The Olympic Trials Marathon. Adriana Nelson, another runner recently granted US citizenship, is running as well. There are a whole host of young challengers behind this group. Maegan Krifchin, who ran a brilliant 71:04 in the Philadelphia Half-Marathon last fall, 2:29 marathober Clara Grant, Meghan Peyton, Sarah Porter, Lindsey Scherf, Alisha Wiliams, Kathy Newberry, and Emily Brown round out a deep, deep women's field.

4. Writing About Running: What changes have you made to the "Equalizer Race"?

Richard Fannin: For the last 8 years, we have started the elite women with a head start over the men - with the overall winner receiving an extra $5,000. For the first 6 years, the "headstart" was 5 minutes - basically the split between the men's and women's American Records (both set on our course). We have changed the rules to the rolling average of the actual split the prior 3 years - rounded up or down to the nearest minute. This year, for the first time - the split will be 7 minutes. I feel the "bogey" for men is 43:00 and for the women it is 50:00. I think the real story this year is - can the women hold off the men ? It has only happened once in 8 years. If you look at the Twin Cities 10 mile championship last fall, which uses a similar format, the split was 46 seconds per mile (Mo Trafeh and Janet Cherobon). An equal split over 15k would be 6:53. So I think it will be very, very close.

5. Writing About Running: What differentiates your race from the other top US road races?

Richard Fannin: I think mother nature is really on our side. March in Florida is typically sunny and beautiful. Many of these runners - who train in often snowy winters in Minneapolis, Flagstaff, and Boulder, et al. - relish the opportunity to come to a "spring break" type of setting (Author's Note: I ran the GRR during my grad school spring break week in 2010). Also, the fact that we really showcase the Americans. Not to take anything away from some of the fine races that award prize money to foreigners, but we really go out of our way to showcase and put the spotlight on America's best every spring. Lastly, we really make it a point to show them all some good old-fashioned "southern hospitality" while they are here. We put them up in the host hotel for 3 nights, have a nice elite pasta dinner with a guest speaker on Friday night, and the race director hosts a dinner is his backyard on Saturday night. It really is a 4 day "happening". Tune in at 8:20am Saturday to watch live on RunnerSpace. It should be quite a show!

Thanks to our new sponsor, RaceSplitter, for sponsoring the blog this week. If you're interested in sponsoring writing about running (and other great sites like TrackFocus, Track Superfan, Paul Merca and the House of Run podcast) in the future, check out The Relay Network.
Posted by Writing About Running at 11:51 AM