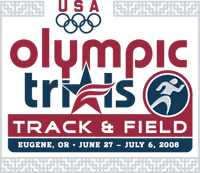 The 2008 US Olympic Trials were extremely entertaining. The Men's 800 kicked off the excitement (and was the race of the trials for me), with the rocket launcher like finish from Nick Symmonds, followed by the Oregon Duck, Andrew Wheating, barreling up the homestretch for second, upstaged only by the Oregon Track Club's Christian Smith, diving at the line for the final spot and getting the Olympic A-Standard in the process.

The trials closed with the Men's 1500, which was set up for drama with the mystery man, Gabe Jennings, looking incredible in the heats, but needing the A-Standard. Jennings took the lead early, but a windy day killed his hopes at a second Olympic team. Also surprising was American Mile Record Holder, Alan Webb, not having a kick over the final 100 and then getting nipped by Will Leer at the line to finish fifth.

The Women's 10,000 was exciting in the fact that Amy Yoder-Begley raced the clock, after she had locked up third place, to attain the A-Standard (which she did by a few seconds). Then Abdi crushed the last lap in the Men's 10,000, to win, and then dove into the steeple pit. What a character! Glad he'll be making a return trip this year in the marathon.

Below are the Olympic Qualifiers in every distance event from 800 - 10,000. Click on the link in each event for full results.

Just think, we're only 3 months away from the 2012 Olympic Trials!

Thanks to our sponsor, restwise, a cool product that quantifies you body's recovery, for sponsoring the blog this week. If you're interested in sponsoring writing about running (and other great sites like TrackFocus, Track Superfan, Paul Merca and the House of Run podcast) in the future, check out The Relay Network.
Posted by Writing About Running at 10:23 AM