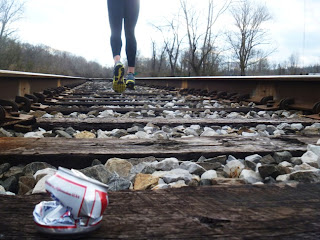 Today, we have 5 Questions with a college student who had a little different spring break than most coeds (and lived to tell about it). She and two of her friends completed "the bicentennial," a feat that very few have accomplished.

Stephanie Stark is a senior journalism student at Ohio University. She and her friends started OU's running club as Freshmen and have competed together in 5ks, marathons and trail ultras since. For their senior year spring break, the three decided to conquer The Bicentennial: running 100 miles and drinking 100 beers in a week. They chronicled their feat in blog form here. Follow Stephanie on Twitter here.

1. Writing About Running: The idea of 100 miles/100 beers in a week has been thrown around for years on the World Famous LetsRun Message Boards. What led you and your friends to take the plunge?

Stephanie Stark: We've been talking about doing this since we were freshmen, since we started running club together. Though we all have very different majors and are going very different directions, we always remained close because we presided over running club for three years. We handed down the club last year, and each went separate ways for internships and travel abroad for half the year, and kept in touch over Skype from all over the world. During one Skype conversation from three different states, we committed to doing "The Bicentennial" for our spring break, so we continued the beer-drinking-training and the running-type-training together when we reunited for the last quarter of our college careers.

2. Writing About Running: Averaging ~14 miles and ~14 beers a day is tough. How much planning went into the feat?


Stephanie Stark: We looked for a lot of information from running blogs and found the advice to frontload the miles and backload the beers. Brad, who is an engineering major, talked it over with other math-whizzes and decided we should run 40 miles in the first two days and 40 beers in the last two days.

After literally months of planning, the boys approached me very kindly to tell me they meant no offense, but that I shouldn't drink the entire 100 if I wanted to make it out alive, as I'm a few dozen pounds lighter than them. Brad computed that my weight is proportional to 70 beers, so I only drank 70.

I received a lot of backlash on those "World Famous Message Boards" for that, but it is ignorant to think I could survive drinking 14 beers each day, and gender equality doesn't always mean gender sameness.

3. Writing About Running: Was there a point in the week where you wanted to give up? When you started dragging, how'd you soldier through the physical effects of your journey?

Stephanie Stark: Once we got into the thick of our runs, about mid-week, we started stopping for a few minutes more frequently just to stretch or to get a drink of water. I doubt if anyone thought they would give up on it; Stevie's pains derived from his lack of running-training, and mine derived from the beer intake.

The most intense run was on the third day, because we had a lot of beers and a lot of miles to get in. None of us remembered the day's second, six mile run until we pieced together how we got from one place to another, six miles away.

4. Writing About Running: Athens, OH (home of Ohio U) is known as a historic college town. For outsiders, what are some of your favorite places to run and to drink a beer in Athens?

Stephanie Stark: Athens is a hidden treasure for drinking (Check out my blog, Drunk, or Athens?) and for running. It has great trails as it's in the foothills of the Appalachian mountains and miles and miles of dirt roads, as it's in Appalachia. My favorite run, though, is on 682 directly underneath The Ridges, which is a haunted and abandoned mental hospital. The Ridges are beautiful and eerie and gigantic crows are continuously circling the biggest building. And to the left, on this run, is the Hocking River overlooking West Green, my favorite place, on campus.

My favorite place to get a beer is Jackie O's, because it has a Razz Wheat that is home-brewed and a very chill back porch.

5. Writing About Running: What did you learn in the journey? And would you recommend this to anyone else?

Stephanie Stark: I would absolutely recommend this, and I'd suggest 1. Do an ice bath every day, 2. Do two-a-days and 3. Don't do it with anyone you would be embarrassed to $hit yourself in front of, just in case.

While the last piece of advice might be harsh, it's absolutely the most important.

Not to exclude our current week's sponsor, as it's in the top right hand corner, but it's not the "approved" audience for this post. A more fitting link is the Craft Beer Club. If you like being surprised with a new mixed 12-pack each month, check them out. If you're interested in sponsoring writing about running (and other great sites like TrackFocus, Track Superfan, Paul Merca and the House of Run podcast) in the future, check out The Relay Network.
Posted by Writing About Running at 10:46 AM

Email ThisBlogThis!Share to TwitterShare to FacebookShare to Pinterest
Labels: 100 miles and 100 beer in a week, 5 Questions with, athens, oh, ohio university, Stephanie Stark, the bicentennial, will run for beer