The show will go on in NYC. 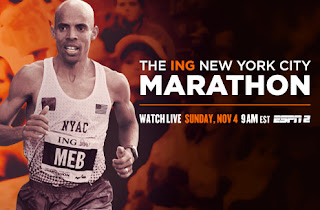 The show will go on this Sunday in New York City. Some hate it, some love it. I fall somewhere closer to the latter. Many are disappointed that their travel has been disrupted. That's tough. I've been flying in and out of LaGuardia every Monday and Thursday for the past seven months and know first hand how best laid plans can go awry. My 3:30-turned-11:30 departure last Thursday seems pretty small in comparison to the desolation that Sandy has inflicted on the biggest and best city in America. I also know how good it felt to run this great race in 2009.

While being the financial capital of the world, New York is also the most resilient city in the world. Many have been displaced, but the city will come together and recover. As much as I feel for those that are in dire straits right now, I'm happy that the race will be run. The New York City Marathon is as good as it gets. Mary Wittenberg and the New York Road Runners will do everything in their power to put on the best race they possibly can for those all over the world on this first Sunday in November.

Whatever your opinion, set your DVR and/or watch the marathon this Sunday at 9am eastern on ESPN. (A program called "Marathon Morning Across America: 2012 ING New York City Marathon" will air at 7am on ESPN 3). The better the ratings, the more likely it will be that more major running events are carried by ESPN. And I think we can all agree that this would be a good thing!

The Trailer - The guys are joined by Lauren Fleshman

...and the always excellent LetsRun.com Men's and Women's preview

Support the site and start here when you shop on Amazon.com
Posted by Writing About Running at 9:41 PM