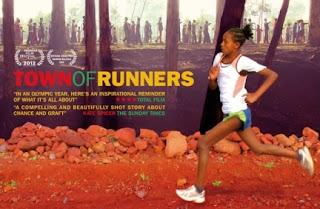 Jerry Rothwell's "Town of Runners" gives us a timely look at how the Ethiopian running system works from the elementary level on up. It's nice to see this, in a moment where the international road racing scene has been called into question. In America, we see new faces pop up from Ethiopia and Kenya every year and this documentary shows us how they are brought up through the ranks, from their hometown to the club system and then on from there... if they are good enough.

The film starts in the small town of Bekoji, where you see a big crowd watching the Women's 5000 meter final from the 2008 Beijing Olympics on a flat screen television. The crowd roars as it becomes obvious that one of the stars of their town, Tirunesh Dibaba, will take the Gold Medal. Other stars from Bekoji include Derartu Tulu, Kenenisa Bekele and his brother Tariku. They were all developed by longtime local coach, Sentayehu Eshetu.

The story then begins to focus on two middle school aged girls, Hawii Megersa and Alemi Tsegaye, who are training with Coach Eshetu, with hopes of showing enough promise to get picked up by a club. If they show enough talent at the Regional Youth Championships in Asella, they are rewarded with a two year contract with one of the clubs, which are located through out Ethiopia. Both the girls run well, with Hawii placing a little higher, but ultimately, Alemi gets into a better situation, as although the government supports the clubs, Ethiopia is still a developing country and some limitations can't be avoided.

Coach Eshetu doesn't have to do much convincing of the girls parents, as moving on from the 12,000 person Bekoji is something they are proud of. "Winning is not without reward. They get money" is part of his sales pitch. "Only education and running" are important, according to Hawii's mother. Unfortunately, Hawii is thrown into a bad situation in Woliso, with poor living conditions, lack of money for dinner for the entire club and a town that doesn't support the runners. She retreats home before falling into another tough situation in Asella. Alemi is a better situation in Holeta, which ultimately brings out the best in her at the Oromia Club Championships.

"Most atheletes in clubs in Addis Ababa are from Bekoji" says Coach Eshetu, whose advice for some young runners during a tough hill workout is "vomit and keep going!" His runners love him and his care is genuine and proven. He's aware that very few will truly make it, but that doesn't stop him from helping all of them.

It's noted that Bekoji had "roads of mud that not many people visit," but by the end of the film, it shows that the roads have been paved and "big trucks will now come through Bekoji." Will that lead to more injuries and more opportunities outside of running? Maybe.

The cinematography in "Town of Runners" is absolutely beautiful and there's a scene of Ethiopians doing the High Jump that you must see to believe. Most of the film is subtitled, as the official language of Ethiopia is Amharic, but that doesn't take away from the very entertaining subjects. It's a film that any running fan will be very happy to see.

Update: Watch in the US is online for free at the Tribeca Online Festival. You can watch the film online anytime between April 19th at 6:45 and 11:59 on April 29th and it is free to watch. But you do need to reserve a virtual seat (and there are only 1000).

Thanks to our sponsor, 14 Minutes, the Alberto Salazar autobiography, for sponsoring the blog this week. I'll be reviewing it very soon! If you're interested in sponsoring writing about running (and other great sites like TrackFocus, Track Superfan, Paul Merca and the House of Run podcast) in the future, check out The Relay Network.
Posted by Writing About Running at 10:02 PM