Film Major: "There is No Finish Line: The Joan Benoit-Samuelson Story" 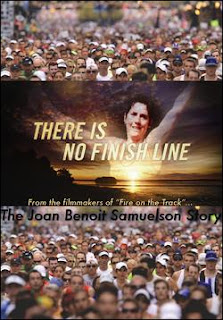 Joan Benoit-Samuelson is one of those people that truly amazes me. And after watching "There is No Finish Line: The Joan Benoit-Samuelson Story," it appears I'm not the only one. From Alberto Salazar to Bill Rodgers to Nike Co-Founder and Chairman, Phil Knight, everyone is equally in awe of how Samuelson has continued to run incredibly over a span of five decades.

"There is No Finish Line" was produced by the late Geoff Hollister and directed by Erich Little, both of whom served the same respective roles on the extremely popular, "Fire on the Track: The Steve Prefontaine Story." The delivery is very similar to "Fire" and the only disappointment is the fact that the film is only 48 minutes long. At the end, you will want to hear more.

The film shows Samuelson's burst onto the international scene at the Boston Marathon in 1979, running 2:35:15, and then winning the first ever Women's Marathon at the 1984 Olympics in Los Angeles, with admiring accounts from many people who are idols in their own right in the running world. Then the film talks about on thing I was aware of (her continued dominance into her 50's), and one thing I wasn't (her passion for environmentalism).

As noted in one of my earlier race reports, I tangled with Samuelson at Falmouth in the Summer of 2010. At the time, I was 31 and pretty fit (for me) and she was 53! I had no problem besting Frank Shorter and Bill Rodgers that day, but Samuelson personified the title of the film in the way she ran this race. I heard the roar of the crowd when she rolled up on me about a mile and a half into the race. I immediately tucked in and dueled with her up and down the hills, for the next mile and a half, before she left me in the dust on the flats. I distinctly remember another competitor running along side her and stepping in front of her stride. She barked at him something along the lines of "watch the *** out." Maybe she cursed, maybe not. But I distinctly remember the guy moving over three feet and me being totally intimidated. She later went on to run 2:47:50 at the Chicago Marathon that Fall on a day where it was very hot and very uncomfortable. Once again, totally impressed.

The side I wasn't aware of about Samuelson was her dedication to the environment. Like running, she has a passion for her native Maine, where she has started the very popular and continuously growing Beach to Beacon 10k. One of her favorite causes is Friends of Casco Bay, which aims to improve and protect the environmental health of Casco Bay. She's involved in much more in her everyday life and you can check out more of the causes that she champions on the links section of her website.

If you didn't know much about Samuelson, this is a great place to start. And if you did, you'll still learn something new. To get more back story, you'll also want to check out her 1987 book, "Running Tide," or her 1995 book, "Joan Samuelson's Running for Women," which you can pick up very cheap on Amazon.com.

Thanks to our sponsor (the above film) "There is No Finish Line: The Joan Benoit-Samuelson Story," for sponsoring the blog this week. If you're interested in sponsoring writing about running (and other great sites like TrackFocus, Track Superfan, Paul Merca and the House of Run podcast) in the future, check out The Relay Network. You can also support the site by buying something on Amazon.com through this link
Posted by Writing About Running at 8:27 AM