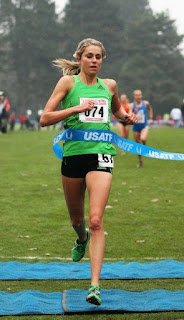 On the Men's side, former William and Mary standout (and now Team USA Minnesota member), Jon Grey, ran away from the field early to take the 10k title in 29:38. Last year's winner, Aaron Braun, was the runner-up in 29:48, and led McMillan Elite, out of Flagstaff, AZ, to a repeat club championship. A surprise late entry was new pro, Matt Centrowitz, who ran a very strong fourth. In his post-race interview, Centro said he'll be transitioning out of base training to getting ready for the indoor season soon. Also somewhat of a surprise was Trevor Dunbar, who recently transferred to the University of Oregon (from Portland). He finished fifth, just behind Centro, but didn't mention anything about his transfer in his post-race interview. Touchy subject? He ran with his former state championship team from his sophomore year of high school. Pretty cool.

Full men's results are here and watch the men's race by clicking here.

Full women's results are here and watch the women's race by clicking here.

Posted by Writing About Running at 9:25 AM