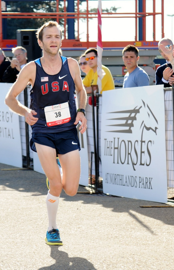 First up is 5 Questions with former local standout, Joe Moore. I first saw Joe running in Raleigh when he won the 2010 Old Reliable Run. Joe spent his last few years living, training and racing in Raleigh, NC and recently moved north to Minneapolis. A few of his highlights over the past year include winning the 2011 USATF 10k Trail National Championship and recently ducking under the 1:05:00 standard in the half marathon (with a 1:04:58); qualifying him for the trials. Check out his blog here and his Twitter feed here.

1. Writing About Running: Where did you run in college and what were your PR's coming out?

Joe Moore: I ran at Kansas State University from 2002-2007.  I was a late bloomer and ran all of my PR's in the last few months of eligibility.  My big name drop from college is that I used to live with 2008 Olympian Christian Smith.  It was really exciting to be rooting for someone running at that level.  It really encouraged me to keep after it.

Writing About Running: How'd it feel to hit that standard?

Joe Moore: It was really cool.  It was a small race, and I don't think a lot of people were paying attention.  There was a tight turn at the finish, and I saw the clock tick over 1:04:50, and I knew I had it.  It was more just a huge relief that I had finally gotten it.

3. Writing About Running: You won the national championship in the trail 10k this summer. What'd you take from that?

Joe Moore: Trail running is fun.  Despite the dangerous nature of the race (especially the Continental Divide race), the atmosphere is really laid back.  Road and track racers can get a little uptight, so i had a great time. I just happened to be in the right place at the right time and was able to jump (Ryan) Woods at the finish.  It was pretty exciting to win a national championship though.  I can't imagine that happening again.  I think I'll hit the trails some more in the future to keep things exciting.

4. Writing About Running: You've recently moved to Minnesota from Raleigh, how'd you enjoy your time in Raleigh and how's the running going in Minneapolis?

Joe Moore: When I first came to Raleigh, I had kind of given up on running.  I didn't know the area well, and didn't have the group I was used to training with.  After a while I decided to run a marathon and in the process, I learned how to train alone.  I also started to run really high mileage, mostly because that was easier to do alone than a lot of hard workouts.  I started to get my longer distance PRs down, and then I got to know Bobby Mack and started to run with him and occasionally with the NCSU team.  I still wasn't really part of a group, but I gleaned a lot of motivation from being around athletes of that caliber again.  Bobby and I were pretty much the TAF elite team, and watching his progress over the last year really encouraged me to keep working my way up.  Right now I'm back to training on my own, but I've been racing all over the place, so I haven't had to do a ton of serious stuff yet.  Hopefully I can get hooked up with some good folks here too.

Joe Moore: I'd like to be in a good spot to finish high.  I don't know what that will be, but since I've bonked in almost every marathon I've run, I'd just like to be able to close hard instead of melt down.  My plan is to go out in a little under 1:11, and then throw down in the second half in 1:08. I might change the plan, but this way might work. It's kind of a dangerous proposition, since nobody will probably go out that slow, and since I usually don't finish well.  I don't have much to lose though, and there isn't any real pressure, since I don't need to hit a time. I don't think a lot of people are banking on me making the olympic team, so I can just go for broke. Running is much more fun that way.

Posted by Writing About Running at 11:35 PM