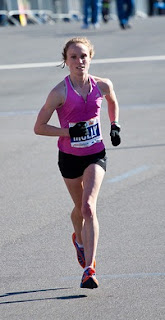 Today, we were lucky enough to have 5 Questions with one of the Women's Contenders on her "Road to Houston." We'll have a few more of these features over the holidays as we lead up to the big day on January 14, 2012.

Molly Pritz is coming off a strong debut Marathon, finishing as the top American this November at New York City, and has had an excellent 2011. Strong Half Marathons in New Orleans and San Antonio, as well as a USATF Road Championship at 25k have vaulted her to the top tier of American road runners. She will have a quick turnaround for the Trials, but looks to be up for the challenge! Follow her on Twitter here and check out her blog here.

1. Writing About Running: You recently ran your debut at NYC, how's the recovery and training for the Trials going?

Molly Pritz: My recovery from NYC went really well. My quads were certainly beat up from the hills and bridges for about three days afterwards, but I spent a week in Hawaii with my mom and took full advantage of swimming in the ocean to help loosen everything up.

I took about 10 days off after NYC and felt ready to dive into training again after a few visits to the chiropractor. Unfortunately, I suffered a nasty fall while out on an easy run about 3 days after I started training again. Needless to say my knee did not like smacking against concrete. Luckily no serious damage was done, but unfortunately I had to miss even more training to allow the soft tissue to recover. I guess I need to work on my ability to not fall flat on my face!

2. Writing About Running: What were your biggest takeaways from racing that distance?

Molly Pritz: I would have to say I learned a lot about myself, not only from the race, but from training for it too. My build up was certainly less than ideal, but I was just so thankful to have the opportunity to be on the starting line of the best marathon in the world and wanted to do my best because so many people had helped make it possible for me to toe that line. In a way, I wanted to perform well as a thank you to them, in addition to the satisfaction of running my heart out.

The biggest takeaway I had from the race experience itself is how important it is to truly enjoy what you are doing. I can honestly say I loved every mile of the marathon, including the miles I felt invincible and the final few miles where the wheels were falling off at an exponential rate. Both in training and the race I found an inner strength I never knew I had and I'd like to think that my NYC experience has not only made me a stronger runner, but a stronger person in every aspect of life. I don't think I could ask for a better takeaway from a race.

3. Writing About Running: You're now being coached by Mark Hadley, who many of us in NC know, but the rest of the country may not. What led you to him?

Molly Pritz: There are so many coaches in our sport that I found it rather difficult to figure out who would coach me post-Hansons. I never really thought I would have to think about it either, so I certainly wasn't prepared for the decision. I didn't know much about Mark's training philosophies, but David Monti, from the NYRR, recommended Mark based on my running strengths and my personality. I completely trust David, so after a few conversations with Mark about his training philosophy and my long term goals in the sport, I knew David's recommendation was a perfect match.

4. Writing About Running: Aside from NYC, you've had some excellent performances in 2011, from the 1:11 Half at New Orleans to the 1:12 Half win at San Antonio, to the 25k National Championship, that you won by a convincing 3 minutes. Which performance have you been most proud of thus far?

Molly Pritz: I would definitely say that my performance last year I was most proud of would be my 1:11 half in New Orleans. I had a very short build up leading up to Mardi Gras and was really  suffering in a lot of workouts. Even on the day of the race I was feeling horrible, but every time I felt like I was faltering I would surge and push harder. Some of my friends asked me afterwards if I was disappointed about being only seconds away from breaking 1:11, and I could honestly say I wasn't, because I can't think of a single moment in that race where I could have made up those 6 seconds. That's the most I can ask for out of any race performance.

5. Writing About Running: What is your goal for the Trials?

Molly Pritz: Since my short build up to the Trials was made even shorter by my fall, my main goal for the Trials is to gain experience by running with the best women in the nation. I have less racing experience than most people my age, so I can only hope that I can learn something by the whole Trials experience that will not only help me with my spring racing plans, but for the rest of my running career.

Posted by Writing About Running at 1:40 PM