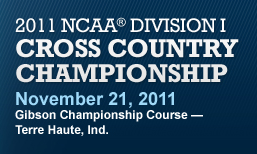 Tomorrow is the 2011 NCAA Division I Cross Country Championships, which are held in Terre Haute, Indiana (home course for Indiana State). The event will be broadcast at noon eastern on NCAA.com and will once again, be packed with many exciting individual and team battles.

Here's a few that stand out:

Men's Individual Contenders
-Arizona's Lawi Lalang has not lost this year. He truly hasn't been challenged. He is a freshman though, so it may not be as easy to win this one as some people think. Expect some competition from the guys below.
-Iona's Lenny Korir was fourth last year. He was four seconds behind Oregon's Luke Puskedra. He should challenge Lalang and won't be afraid to inject some speed in the pace, if it dawdles.
-Puskedra has been top five twice and has run well all year. Expect top ten at the absolute worst. Like Korir, Puskedra is not afraid to push it, if needed.
-NC State's Ryan Hill has had an excellent season and has only lost to one person. That man is Lawi Lalang. Hill finished second to Lalang at Griak and at Wisconsin, before winning ACC's and the Southeast Regional. Hill can kick with the best of them and should go top five (Disclaimer: he was my top pick in my fantasy draft. 5th overall).
-Stanford's Chris Derrick has always been consistent. Similar to Puskedra, he's seasoned and ready to go. This year, an individual title is on his mind and expect him to lay it all out there.
-BYU's Miles Batty is great over every distance. Coach Ed Eyestone has him raring to go, and like Hill, he can kick from far out.
-NAU's Diego Estrada runs excellent with a chip on his shoulder. He'll look to throw down one more good one in a field of strong competitors tomorrow and will be the dark horse of the group.
-The big enigma is Oklahoma State's German Fernandez. He's run excellent all year and a conference  title should give him the confidence to go for it. He may be conservative with a team title on the line, but you never know what's coming, which makes him intriguing.

Men's Team Contenders
-Oklahoma State has won two in a row and is primed for a third win. Fernandez has run strong all season. Colby Lowe has been excellent as usual. Tom Farrell will lead the rest of the group to a potential three peat.
-Wisconsin has looked effortless all season. Will their pack finish far enough towards the front to give the Cowboys a run for their money? Mo Ahmed will lead the way with Maverick Darling, Ryan Collins, Reed Connor and Elliot Krause all needing a strong race for the Badgers to have an honest chance.

-Villanova's Sheila Reid is the favorite to repeat here, as she has looked untouchable once again this year. She may get some competition from Oregon's Jordan Hasay and North Carolina's Kendra Schaaf, but she'll be hard to beat down that last straightaway.
-Hasay has beaten Reid before and can beat her again. Will she have it today? When she's on, she's one of the best. It'll likely come down to that last 500.
-Schaaf has been here before and she looks the most ready this year to make a run at the title. Unlike previous years, Schaaf has been hanging with the pack and running reverse splits from the first 3k to the second 3k, consistently. Expect her to make a move mid-race as being in a kicker's duel with Reid and Hasay won't be in her best interest (Disclaimer: she was my top pick in my fantasy draft. 3rd overall).

Women's Team Contenders
-Florida State has been dominant all year with a minimal spread. Expect Karen Harvey's women to improve on their runner-up finish last year.
-Villanova will have the benefit of getting the low stick from Reid and from the always excellent coaching from Gina Procaccio. Expect them to make Florida State work hard to take the title belt from them.
-Georgetown may be the hottest women's team right now. Have they been racing too hard? Emily Infeld will lead the Hoyas to a podium finish at minimum.

As with Cross Country, expect the unexpected. It should be a wild ride. Stars will emerge and some will buckle under pressure. Let's hope for some great weather and some honest races!

Posted by Writing About Running at 5:51 PM