Bookworm: "Running the Edge" by Tim Catalano and Adam Goucher 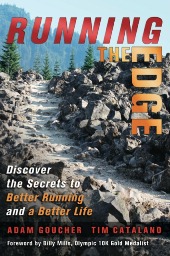 This book came along at a great time. Coming off injury and anxious to get back to it after a month off, due to two nearly stress fractured shins, "Running the Edge" was exactly what the doctor ordered.

"Being a runner is truly a gift. Runners have access to a world and a set of life lessons that can transform every aspect of their lives."

The above statement couldn't be more true. College teammates at the University of Colorado, Tim Catalano and Adam Goucher recount excellent tales from their past to teach lessons in running and life, with the goal of helping the reader become a true "distance maven;" a term you'll become very familiar with while reading "Running the Edge."

Goucher touches on everything from his big wins in high school, to his duels with Bob Kennedy as a young pro, to his early exit in the rounds of the 5000 in the 2004 Olympic Trials. Catalano soars in telling tales about the high school team he's coached that had doughnut eating contests, water chugging exhibitions and a near fatal climb to the top of Bear Peak in Boulder, CO. Both writers complement each other excellently and provide great information on how to become an excellent runner and an even better person.

Both touch on something that's been talked about in other running books, their relationship with ledgendary Colorado coach, Mark Wetmore. Chris Lear's "Running with the Buffaloes" gave us a little insight into Coach Wetmore's wizardry, Matt McCue's "An Honorable Run" gave a little more, and "Running the Edge" digs a little deeper. Catalano discusses his chat with Wetmore in 1996 where he was battered and fighting to make the Olympic A-Standard (in the Steeplechase) and Wetmore told him to "go be great at something else." Sage words from a man that has coached many world class runners. That kind of candor has made Wetmore the renowned coach that he is. Goucher talks about when he and Kara cut ties with Wetmore, after some terse words about his slowing career, only to resurrect it with a trip northwest to Portland, to join Alberto Salazar's Oregon Project (they have recently left).

The book has plenty of great reference information that goes far beyond the first read. Catalano and Goucher have spent a lot of time here making an outline on how to run well, live well and be accountable for your actions. Both admit to making many mistakes along the way and this book is their way to help others avoid those! Goucher also talks about "an amazing dry-rub seasoning for grilling steaks" that I'd like to have the recipe for!


The book is sprinkled with nice one liners from Chris Solinsky, Kara Goucher, Galen Rupp, Dathan Ritzenhein, Paula Radcliffe, Amy Yoder-Begley and Alan Webb. The book also goes beyond the page with a thorough companion website and oft-updated blog that's worth checking out.

Pick up a copy of "Running the Edge" at RunTheEdge.com or at Amazon.com

Posted by Writing About Running at 12:04 AM