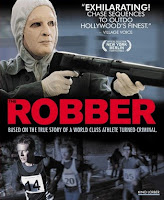 There's a new "running" film available on DVD/Blu-ray. It's "The Robber" (aka Der Räuber), which is the Benjamin Heisenberg-directed film based on the true story of Austrian bank robber/marathoner, Johann Kastenberger. The screenplay was adapted from Martin Prinz's 2006 book, "On the Run." The film made the film festival rounds in the spring, but the DVD/Blu-ray release will be most's first exposure to the film. It's also available on Netflix Instant. The film is in German, but is sub-titled in English and is very easy to follow, as the dialogue is very deliberate.

So who was Johann Kastenberger? According to the film, and to Wikipedia, Kastenberger was a convicted bank robber, who was first arrested in 1977 for robbing an Austrian bank. He served a 7-year prison term and trained extensively while in person. Upon release, he made an instant splash in the marathon, setting an Austrian national record (the film shows 2:20, but I can't corroborate that anywhere online and haven't read Prinz's book yet). The film does show him winning the ultra difficult Kainach Mountain Marathon in a still standing record of 3:16. Not long after being released from prison the first time around, Kastenberger reverts to his bank-robbing ways and becomes known as "Shotgun Ronnie," due to his penchant for wearing a Ronald Reagan mask during his robberies. This is something that is left out of the film.

Andreas Lust does a very passable job in portraying a competitive runner. He's fit, has good form and most importantly, looks the part. There are some excellent action scenes in "The Robber," particularly one after a robbery nearly goes awry and he runs through multiple buildings being followed by a single camera, and ends up hopping on a trail to evade the police. It's a very entertaining film and is well worth 90 minutes of your time.

Pick up "The Robber" at Amazon.com (on DVD / on Blu-Ray) or watch instantly via Netflix.

Posted by Writing About Running at 4:51 PM