Diamond Dash: Will Angela Bizzarri's ticket get punched to Daegu on Day 2?

Angela Bizzarri has been in this position before. This is the second time she's qualified for a worlds team without having hit the A Standard. In 2009, she tried to get the standard, but was out of steam after a strong NCAA season (and a 5000 meter title). This year, her teammate Amy Hastings, has been trying to duck under the 15:14.00 A Standard so that Bizzarri can get in with the B. Hastings has come very close running 15:15 twice and will take one more crack at it in London tomorrow. She'll have the help of another teammate, ageless Jen Rhines, who could be helping as a personal rabbit, as she's already qualified for Daegu in the 10,000. Best of luck to Hastings and Rhines, that's true teamwork! Here's the finishing order from the USA Championships in June.  Also in the field is a re-surging Lauren Fleshman, as well as Boston Marathon runner-up, Desi Davila. Full startlist for the 5000 is here.

Also on Saturday is an American filled Women's 3000 meter Steeplechase. National Champion Emma Coburn leads the Americans with 2010 NCAA champ Bridget Franek and new Nike signee, Lindsay Allen, competing as well. Coburn and Franek will be preparing for Daegu against a strong field.

Former Tar Heel, Erin Donohue, will be leading many Americans in the Women's 1500. Donohue will likely be targeting the 2012 Olympic Standard of 4:06.00 (full 2012 London A & B Standards listed below), as her seasonal best is 4:07.04. The statesiders that will be joining her (and seeking the 2012 A) are Daegu-bound Shannon Rowbury, Treniere Moser and Gabrielle Anderson. Also in the field is the local favorites, Lisa Dobriskey and former FSU star Hannah England (as well as a host of others).

The event will once again be broadcast on Universal Sports and full meet info can be found here. 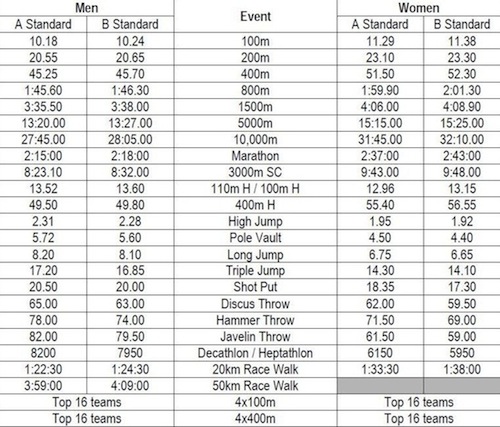 Posted by Writing About Running at 4:29 PM