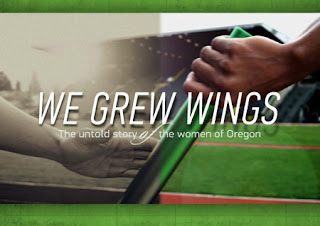 Ellen Schmidt-Devlin produced the film and introduced it to the media at the Track and Field Writers Association breakfast during the Olympic Trials. It debuted that week at historic McDonald Theatre in Eugene and was released on DVD this week.

Schmidt-Devlin's film introduces many to the stars of the 1985 National Champion team and the early stars of the Oregon Women's program; including Grace Bakari, Claudette Groenendaal and Leann Warren. The film also underscores the 40th anniversary of Title IX and its positive effect on Women's Track and Field.

Prior to the film, I was unaware of Leann Warren's excellent career at Oregon and her surprise qualifying for the 1980 Olympic Team in the 1500. Like Christian Smith in 2008, she was one of the last in, and would qualify in the third spot behind the heavy favorite, Mary Decker (Slaney). Slaney would be featured in much of the film as well, as she told of when she was a 14 year old prodigy, Prefontaine himself took her under his wing and told her "if you want to be good, come to Oregon." She didn't attend the U of O, but now resides in Eugene.

The film also features the evolution of the Women's program at Oregon, specifically on the 2011 team and focuses on Jordan Hasay, Jamesha Youngblood and English Gardner. I had the pleasure of meeting Gardner's father on my flight from Charlotte to Portland this year before the trials and it was exciting to see her evolution as an athlete on film. Her and Youngblood are part of the "new Oregon" movement that includes more than just distance runners and are led by the sought after coach (and former Appalachian State star) Robert Johnson.

The film is very well done and is directed by the filmmakers of "Fire on the Track" and "There Is No Finish Line." As mentioned earlier, "We Grew Wings" is now for sale at Amazon.com and you can check out the film's website: WeGrewWings.com and follow the film on Twitter @WeGrewWings

Support the site and start here when you shop on Amazon.com
Posted by Writing About Running at 9:52 AM