The Sydney Track Classic in Australia has kicked off many athletes chase for the Olympic A-Standards this year. Nick Symmonds had a subpar opener in the 800, running 1:47.44 for seventh, in an event won by Kenya's Asbel Kiprop, in 1:45.91. This doesn't have any bearing on Symmonds attaining the A-Standard though, as he attained it last year, running under the 800 A-Standard of 1:45.60 during the window of May 1, 2011 - July 1, 2012. The one exception to this is for the 10,000, where the window is January 1, 2011 - July 1, 2012, likely due to the small amount of competitive 10,000's available to hit the standard. This makes the US Olympic Trials the last chance to hit the standard with no post-trials chasing.

Expect more and more attempts after USA Indoors next weekend. The Stanford Invitational on April 6 and 7 will likely be a big one that many will target, then Mt. SAC two weeks later.

Here are the Olympic A and B Track Standards: 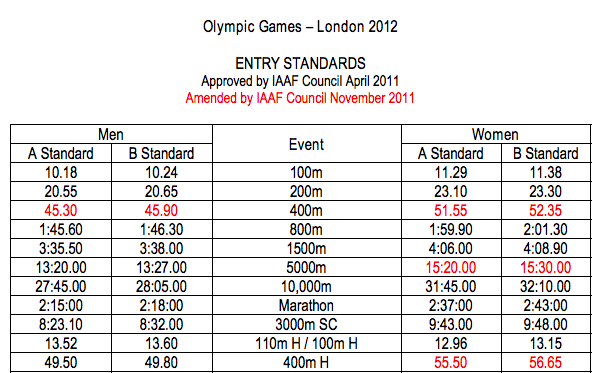