My 2 Spikes Worth: Sponsorship from a Hobby Jogger's perspective 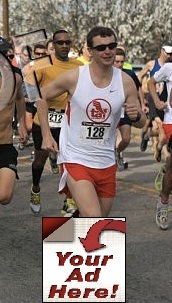 On my usual Thursday afternoon drive home from Winston-Salem to Raleigh, I usually stop off somewhere along the way for a nice trail run. Yesterday, it was the Woodlands trails in Chapel Hill. If traffic is light, I'll usually check out Twitter and see what's going on. One thing I noticed yesterday was Oregon Track Club's Tyler Mulder tweeting out that he's "one of the newest members to be a part of @PowerBar Team Elite! Excited to see how the nutritional side will help me gain some edge!" Believe it or not, I was invited to be part of PowerBar Team Elite as well. I'm going to assume it's more on the prowess of the blog than the flames coming off my shoes in a high seventeen minute 5k. But you know what? I applied for it and they picked me. As Wayne Gretzky said, "You miss 100% of the shots you don't take." From looking at the roster of runners for PowerBar Team Elite, there are some people shooting, and some that are not. Some names I recognized were: Sam Chelanga, Jeffrey Eggleston, Zoila Gomez, Fasil Bizuneh, Molly Pritz, Colleen DeReuck, Zach Hine, Jesse Armijo, Shayla Houlihan, Tyler McCandless, Erin Bedell, John Jefferson, Wendy Thomas, Ryan Vail, Mike McKeeman (Tar Heel), Jimmy Grabow, Ricky Flynn, Danny Mercado, Nick Arciniaga, Stephan Shay and my friend, Joe Moore, who had a great quote on his blog about the sponsorship. "Now all the money I blow on PowerBars, I can save to blow on something stupid. This is a good deal especially because PowerBar makes tons of different stuff. Should be sweet."

Many thanks to PowerBar for the two year sponsorship that is very generous. Hopefully more companies will follow their lead in such a large sponsorship campaign. And if you missed the boat this time, mark your calendar for fall 2013, when they'll open it back up. Lesson to be learned? Unless you've got a deal with another drink company, a la Gatorade, Hammer, etc, apply for stuff like this. The worst they can say is no. The application may take 30 minutes and the payout is worth it.

Another tweet that caught my eye this week was from steeplechaser Derek Scott. "Not fast enough for big shoe contract? Go seek out local options and rep your city. People are willing to help!" He's right. There are tons of great running specialty stores across the country that are willing to help fledgling elites (and non-running stores, for that matter). Once again, I am no elite, but have a nice sponsorship with Raleigh's Capital RunWalk (formerly The Athlete's Foot, Cameron Village). What does this get me? I get some nice gear, free entries to local races and a nice discount at the store. And if I were "elite," like the Elite Racing Team coordinator at the store, USATF 8k Champ and former World Cross competitor, Bobby Mack, I'd get travel to road races and bonuses based on performance. If you are going to the Olympic Trials this summer in Eugene or are on the cusp and trying to get a qualifier, go search out your local running store. I'm sure they'll make it worth your while to wear their kit or logo while you're winning road races and competing at big track meets around the country.

Finally, the elusive shoe deal. Who doesn't want one? We all hear about Matt Centrowitz or Jenny Simpson's deals and druel a little, but that's not reality for most folks. What is reality for many elites is some kind of gear deal or discounted gear deal, or if affiliated with a running store, a "we'll give you six pairs of shoes and three pairs of racing flats" kind of deal. If Ray Flynn isn't banging down your door to get a meeting together for you and Phil Knight, there are some nice options. The Brooks ID team is a nice one worth checking out if you are borderline elite/sub-elite and then there's the tier below that, which I am a part of, the Brooks Fanatics team. This still gets you some nice deals on races and monthly offers that are usually 30-40% off shoes and apparel at BrooksRunning.com. Nothing wrong with that! Also, companies like Running Warehouse offer excellent deals for clubs. I got my running club at work a fifteen percent discount code, which is great, and took five minutes to hammer out an email.

So what can you do to make yourself more marketable and get some of these deals?

1. Tweet
And when I say tweet, think "content is king." If you're Andrew Wheating and have run a 3:30 1500, you can get by with "Anybody else notice the Papa Johns guy always twitches his head when he says their slogan?? So annoying!" But if you're still coming up, try and put something out there that people can dig into a little bit.

2. Blog
You don't have to give a blow by blow on your training, but a little look into the crystal ball about how you get there will make people keep coming back.

3. Have a website
This doesn't have to be anything special and can be the host of your blog or just a link to your Twitter/Facebook/Email. When people search for you online after you rip a good race, this is what will pop up first in a Google search. Don't you want to control that and not have it link to some message board post?

4. Be available
This doesn't mean you have to answer every shoutout on twitter or fan request, but don't make it seem like you don't have time for anyone. A few years ago, when my right hamstring first started acting up, I was watching a meet on TV when Leo Manzano said he had been taking some downtime due to hamstring issues. I emailed him about it, and sure enough, he replied back in a few hours with some great information. That goes a long way. Pass on the knowledge!

5. Be yourself
Not everyone is a marketing guru like Josh Cox and trying to be something you're not may rub people the wrong way, or make you feel uncomfortable. If marketing isn't your thing, find a friend that's willing to help. Doesn't have to be a manager/agent type relationship, just someone who's willing to help you put together a plan and email some people. If you have any questions, feel free to email me. I'd be happy to help you, pro bono.

Footnote: But what if I outperform my "gear deal"
If you sign a small potatoes deal and outperform it, renegotiate, opt-out or have an escalator clause that says if I run x, I get y! If you've got a "deal" with Gary's Track Shack and Adidas wants an exclusive, it's gonna work out. I worked in the music business right out of college and had a showcase for one of my bands that ended up gaining them an offer of $50,000 for 50% of the publishing to four songs (from an executive of a company that makes bags that women like). The band had just signed a distribution deal and had never been on the radio. I said take it. They scoffed. The songs were recorded and a year later, the distro deal got weird and they couldn't ever release the songs. Money lost my friends. When money's on the table, take it! If you kill it and go to the Olympics, you're gonna get paid. Don't keep holding out for a better deal that may not be out there.

Now go find a sponsor, no matter how little. People want to align themselves with people that work hard and no one works harder than a competitive distance runner. And yeah, it's an Olympic year, milk it!