The Run Down: Patrick Makau sets new Marathon World Record of 2:03:38 in Berlin 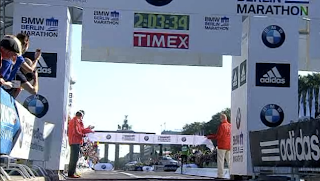 2011 has been the year of the Marathon. First, Geoffrey Mutai lays down an astounding 2:03:02 at ("aided") Boston. Now, Patrick Makau has repeated his 2010 win in Berlin with a new World Record of 2:03:38, breaking Haile Gebrselassie's mark on the same course.

What was exciting about Makau's run is that he ran the last 30 minutes by himself. As the last pacer fell off, Makau didn't have the luxury of having Moses Mosop push him, as Mutai did in Boston. He also nearly missed the finish line, as he had to hop the curb (see above photo) with 20 yards to go to break the tape, nearly avoiding a marathon blunder.

Former World Record holder, Haile Gebrselassie, did not finish. He said post-race that he aims to run a fast time at the Dubai Marathon (January 27, 2012).

On the Women's side, Kenya's Florence Kiplagat broke the gold standard 2:20 barrier with an excellent win in 2:19:44. England's Paula Radcliffe ran her first marathon in nearly two years, finishing third in 2:23:46, an excellent litmus test to see where she is with the 2012 London Olympics looming (in her home country).

The event will be rebroadcast at 8pm eastern tonight (Sunday, Sept 25) on Universal Sports.

Posted by Writing About Running at 8:51 AM