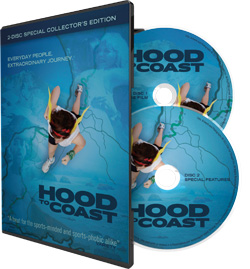 The Hood to Coast Relay is something that I had heard about for years in passing, but being from the east coast, the only relay near us worth competing in was the Blue Ridge Relay. The release of the Hood to Coast Movie has changed that and has truly propelled the relay to a worldwide destination event.

If you are unaware of the Hood to Coast Relay, in short, it is a 12-person, 197 mile relay that starts at Mt. Hood in Oregon, and ends in Seaside, OR (not the one where Jersey Shore is filmed). There are 36 legs, so each runner generally will run three legs each, with each leg spanning 3.5 to 7.8 miles. 1250 teams are allowed to compete and are started slowest to fastest (based on self reported 10k times). Each team is allowed two 12-person vans and must support themselves with food, etc.

In the fashion of "Spirit of the Marathon," Hood to Coast's storyline is based on four teams competing. Team Heart N' Sole is based around Kathy Ryan, a competitor who was pronounced dead at the previous year's event and is on a quest to complete a marathon in every state. Dead Jocks in a Box are a group of aging Masters runners who have been doing the event for 25+ years and are still quite competitive. Team R.Bowe is a group of family and friends running in honor of Ryan Bowe, a guy about my age who died far too young of a heart condition. The final team was Thunder and Laikaning, which is a group of artsy beer drinkers, who enjoy life and just wanted to do the event for the challenge. These are probably a pretty good sample of the types of teams you would see competing at Hood to Coast each year.

All in all, it's fun to watch how the different groups navigate through the course and overcome their own personal demons (or lack there of). Personally, I would have liked to see the film focus a little more on the course, the race and it's history and the more competitive groups up front, but I realize that story wouldn't translate to the masses and the "marathon craze" that we've been experiencing over the past few years in America. The film does have some excellent shots of the breathtaking Pacific Northwest that will make any runner consider the event and does take about the wild expansion that started as eight teams who wondered if anyone would want to do it the following year. Runners of all ages and competitive divisions will find something to like about Hood to Coast, and if you're like me, you'll want to compete in the event after seeing the documentary.

For those of you interested in competing, the registration period for the 2012 Hood to Coast Relay opens October 12 (here's the entry form). And if you need another person to complete your team, email me! 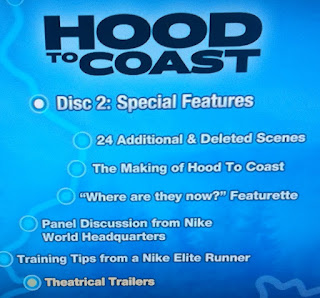 Some extras that you will get with the DVD that you wouldn't see in the theatre are tons of deleted scenes, running tips, a "Making of Hood to Coast" piece and my favorite segment of any documentary DVD about groups of people; the "Where are they now?" featurette. Since this was filmed at Hood to Coast 2008, it's fun to see the changes in the lives of some of the members of the four teams that were followed three years ago.

Pick up a copy of the 2-Disc Special Edition DVD (or Blu-Ray) from the Hood to Coast Movie website or from Amazon.com (DVD / Blu-Ray).

Check out the "Hood to Coast" trailer here:

Posted by Writing About Running at 5:30 PM