Today marked the third race of the Second Empire Grand-Prix. It was the Torch Run 5k and was the same course as the Free to Breathe race at NC State's Centennial Campus, just in reverse. This made for a very long uphill second mile. This was also my first race running in The Athlete's Foot Racing Team singlet (and shorts). It's a great new partnership that myself and my fellow Bromar Track Club teammates are entering into!

After a week of travel for work, I was a little tired going into the end of the week and ended up taking off Thursday (per travel) and Friday (per an ailing shin and hip). This was smart as I needed to heal up! I was a little worried going into the race, but those nerves calmed when the gun went off and I felt great. I wasn't able to cruise the first bit with my training partner, John Simons, as he was sitting today out due to the recent birth of his new daughter Liza. I was able to pace off a consistent competitor, Brent Hale, and was rolling for the first half mile before we hit "the hill."

As we crawled up the long hill on Centennial Parkway, I realized the on course mile splits were off. My Garmin had me at 5:38, which seems about right. Brent and I were sitting 4th and 5th with a small pack of 5 behind us going up the hill. By the time we got to the top, we had caught the guy in 3rd (Rodney Scott) and ditched the pack. As we went down the hill at the roundabout and hit the 2 mile (11:37 per Garmin), Brent and Rodney started to pull away from me, but I kept pushing hard. The last mile was solid (5:39) with a lot of rolling hills, and I was able to muscle through and throw down a decent last .14 at 5 minute pace to finish 5th overall; just under 18 in 17:59. It also should bump me up to 2nd in the Grand-Prix standings when they are released as a few guys sat out today. 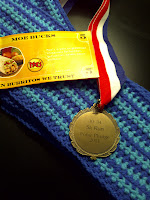 All in all, I was very happy with today's race. I went in a little dinged up and wore the Oxysox again to support my sore shin. I competed hard the full race and can tell the consistent long runs, tempos and long intervals are paying off. I am very excited for the 10k next weekend, as there are so few offered these days and hope to throw down a good time as I believe the longer distance will play to my (current) strengths. I am also excited about the Run for the Oaks 5k in 2 weeks, which is a good deal flatter than the first 3 Grand Prix 5k's. I was also pleased with my splits today, considering there was a 124' elevation gain from 0.5 to 1.5 miles per the Garmin dump. For my efforts, I was able to win a nice hand knitted scarf, a medal and $10 worth of Moe's bucks!

For more info, check out: http://patprice.com/running/races/reports/20110226TorchRun.htm

Posted by Writing About Running at 7:11 PM