January was an exciting month. I had an excellent training block that was filled with 252 miles (my most ever) and ended with a fast 5k tempo on the track. After a true down week (20 miles) to recover and heal up from some nagging injuries (hamstring), I was back at it this week (48 miles) with a solid mile repeat session on Wednesday and was excited to race. John and I jogged the Run for the Roses course yesterday to get a feel for it and I drove it twice this morning to prepare for the rolling hills and wide tangents that would be presented to us at 2pm today.

Run for the Roses is the longest standing race in the triangle (31 years) and it was also the second race in the Second Empire Grand-Prix. It was also my first race as a once again Raleigh resident (thanks to a new job). The weather couldn't have been better as it was mid 50's at the start with the sun shining down. No gloves, no undershirt; just my Bromar singlet, shorts, flats, garmin, shades and oxysox (as I have been battling some shin splints). Got in an easy 2 mile warmup, some strides, and then got to the line and was ready to roll. 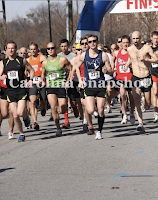 The gun went off and I got out well. Slight uphill to Delway where we headed up towards Blount Street. Looped up to Person and headed into Mordecai. The first half mile was slightly uphill and then we had a nice mile or so of slight downhill. I believe the mile markers were off a little bit as I crossed the official mile mark in 5:23 (my garmin had .96 miles and 5:33 for the full, which was more like it). Towards the end of the second mile, we hit the first big hill. It was a long one that I was able to pick a few people off on before heading down and around the roundabout at the 2 mile mark. Hit the course 2 mile at 11:07, but my Garmin had me around 11:18. This is where it got tough. 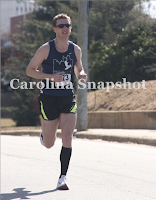 The last mile on the Run for the Roses course is brutal. If you take a look at my Garmin dump, you can see we rose (no pun intended) 100 feet in elevation with many ups and downs. What you can't see is the excruciating wind. My last mile (according to my Garmin) was 6:06. Not too sexy considering my other splits, but I continued to gain ground and passed a former Division I runner with about 600 meters to go. Hit the 3 mile in 17:25 then ripped the last .11 at 4:35 pace to finish 12th overall in 17:55 (and 3rd in the strong 30-34 age group). Thanks to Inside-Out Sports for being a sponsor and awarding the gift cards! 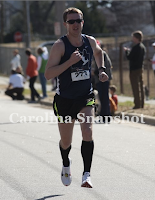 The competition was much stronger today than the Run for Young, but John and I held serve against the guys that competed in that race and should hold onto 4th and 5th overall in the overall Grand-Prix standings (when they are tabulated). It felt great to compete again and I felt my effort was 100% the whole way. It has been nice having two excellent training partners in John Simons (Raleigh) and Tyler Pake (Greenville). Strong tempos, long intervals and strong long runs at Umstead are paying off. Looking forward to the rest of the Grand-Prix season and of course, my return to Boston.

PS. On a side note, one thing I noticed today was that the race was a "no headphones" race. When I first started running again in the mid 2000's, albeit slowly and very sporadically, I joined the North Carolina Roadrunners Club (before leaving to help form Bromar). One of the last things I remember was a big fight on the email list about them DQing one of their own for wearing headphones in this race. It was kind of childish, but I thought it was a good stand to take and wish more races would outlaw headphones. Cheers to NCRC for sticking to their guns in iPod friendly times and for putting on an excellent race with great volunteer support.

PSS. To the woman that kept yelling at her approximately 7 year old son to sprint out front at the start so she could get a picture, you are setting a bad precedent. Luckily he didn't listen to her as he would have gotten trucked (as the start area was very small). Let the kid enjoy the race. Get a good photo of him finishing!

For more info, check out: http://patprice.com/running/races/reports/20110213RunForTheRoses.htm

Posted by Writing About Running at 9:21 PM