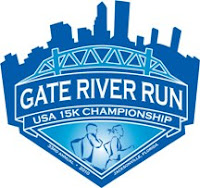 The Gate River Run is an awesome race. I had heard a lot about it and luckily it fell on my spring break this year. Even more convenient, my good friend Payton Rogers lives in Jacksonville, so I was able to stay with he and his fiance Courtney. Flew in Friday and picked up my packet at the expo. Cool Adidas tech shirt and cool number with my name on it (see below), which was quite popular with the locals being that most folks were celebrating St. Patty's along the course and liked yelling "Patrick." Went to a cool restaurant called Bistro AIX on Friday and saw Antonio Vega (who came in 3rd overall) and my friend Jon Swope from Charlotte. 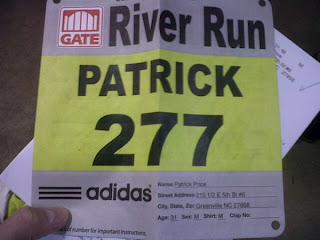 Got up early Saturday and headed over to the course. 20,000 entrants and luckily I was seeded in the top corral with the elites (top 300). It was cool warming up by people like Jen Rhines, Tim Nelson, Vega, etc. They took off like a cannon when the gun went off! Went out a little too fast in 5:32 as I got a little caught up in the moment. Ran mile 2 in about 6 and then hit 3 miles around 17:40 before rolling through the 5k in 18:22. Had been sick all week and felt a little dead legged, so really focused on my form and tried to work to my strengths over the rolling course. It was hot too. Wow. I practiced taking water, which will hopefully help at Boston and really worked the hills well. After slogging through the second 5k to get to 10k in 37:32, I really started to turn it on shortly thereafter. 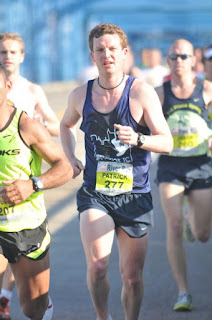 My last 5k was only 19:12, but lots of people were coming back to me as it was the toughest 5k of the 3 by far. The first mile and a quarter (of the last 5k) were up through a neighborhood before you got to the highway overpass and stared down what they call "the green monster," which was a half mile 7% grade hill (the Hart Bridge). Passed a few folks on the highway, a few on the bridge, and a bunch in the last 600 after the 9 mile mark. Really wanted to break 57 and just hammered it home passing 5 guys in the last 0.3 miles (including a guy that ran 2:44 at the City of Oaks Marathon 2 years ago where I "ran" 3:56 before starting to train). Finished in 56:44, grabbed a free massage, some free Coors Lights at the post race celebration and saw my name on the jumbotron just a few spots back from Bolota Asmerom and a ways ahead of Matt Gabrielson (ok, they had off days). The heat that was tough during the race felt great afterwards. Fun race, fun weekend. Highly recommended as the folks from Jacksonville and 1st Place Sports put on an awesome event.

I also found out shortly after the event that I placed in the USATF National Championship. It was quite a thrill seeing my name on that page considering how hard I have worked in the past year!

Posted by Writing About Running at 3:53 PM